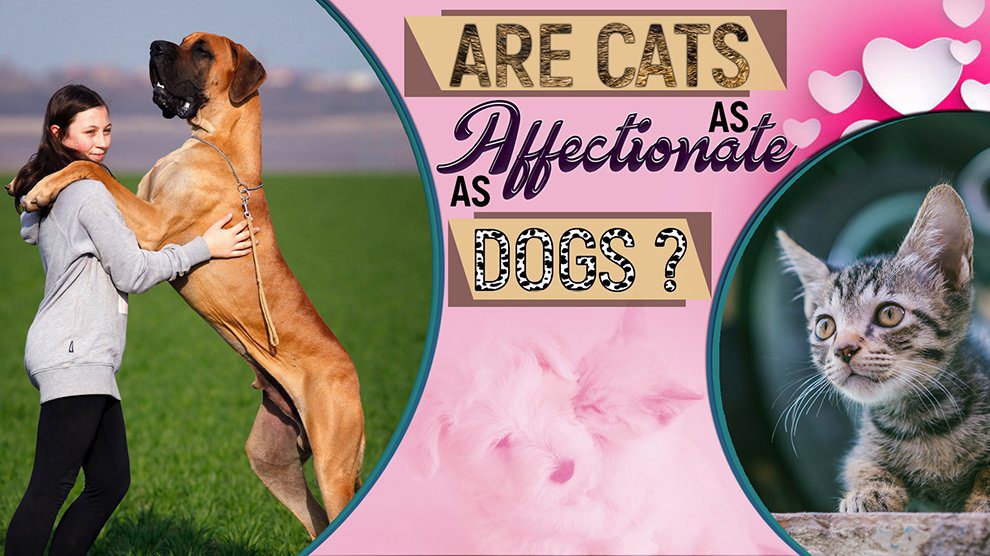 Dogs vs Cats – Are Cats As Affectionate As Dogs?

Several years have passed by since dogs were started to be grown as a house pet. Dogs enjoy the love of humans because they are loyal, affectionate and intelligent. Comparatively, cats are grown by a lesser number of people.

Do cats show their affection like dogs? The major opinion about cats and dogs subsists, notable amidst the masses is that only dogs will be affectionate pets of humans.

Nevertheless, growing cats as a house pet seem to be increasing in many countries in the last few years. The immediate reason is that taking care of cats is easier.

Are cats equally affectionate to humans like dogs are?  Of course, divided views of Dogs vs Cats exist but the major opinion notable amidst masses is that only dogs show affection.

The reasons for justification of the above statement:

According to a scientific study conducted in the UK by some neuroscientists, they found that the release of hormone Oxytocin was comparatively higher in dogs.

Oxytocin is a love hormone that is present in humans and also in dogs and cats. The outpour of affection or love is based on the working of this hormone.

After testing the saliva samples of both these animals, again in view with dogs vs cats, the findings showed that oxytocin release was comparably high in dogs.

Dogs are more outward and friendly by nature. They easily bond with their boss and show their affection through spontaneous joy resulting in wagging tail, jumping on them and licking their hands. Cats always remain a mystery since they always display observance.

A dog helps its owner to maintain good physical and mental fitness. A dog owner will definitely get rid of stress through activities like walking, training and play with the dog. The affectionate dog helps in so many ways while this is definitely not possible to see amongst pet cats.

4. Dogs respect their owner and obey their commands

Normally, all pet dogs respect the words and feelings of their owner and obey their commands. It is never even heard that cats possess this trait.

Dogs usually socialize well if its owner equips it accordingly.  You can always notice that dogs remain quite playful and in most of the cases when brought to the public space, most of them show that keenness to play. Cats normally prefer to stay indoors or if taken out, confine themselves within their private basket.

It is normally stated that the dog is a good friend to humans because of its entertaining trait. During dog owners are in a worried state, they will turn joyous once they see their dog do some entertaining act. Generally, cats do not possess this characteristic.

7. Dogs can be trained for works

Dog owners usually keep their dog well trained, to do small works. For example, picking things kept at the doorstep of the house and bringing it inside. In the case of cats, they only remain troublesome and cause irritation to their owner.

9. Dogs care for their owners

When the owner undergoes bad health or an injury, a dog will show utmost care and eagerly wants him/her to speedily recover. Cats do not actually care for their owner during such situations.

During dangerous situations like a major fire accident in the house, a dog will immediately raise the alarm. In the case of a cat, it will only quickly escape from the scene of action.