In canines as well as in humans, names work as attention seeking inducement.

It is a house party. The hall is full of people engaged in animated discussion. All a sudden, you somehow think that you hear someone call out your name.

You don’t identify the speaker, but you concentrate on that specific conversation, leaving out most other sounds.

Do names really have that power? Or is it an illusion?

The Psychological Power Of A Name

Names have that ability to attract, particularly your first name. It has such a powerful psychological presence that doctors and paramedics are trained to learn the name of the rescued person.

The reason is simple. These persons may shift in and out of consciousness and their name is their calling card.

These trained persons will use the injured person’s name to see if they respond. A person will try to move their head, in the direction of people calling out their name.

The Power Of A Dog’s Name 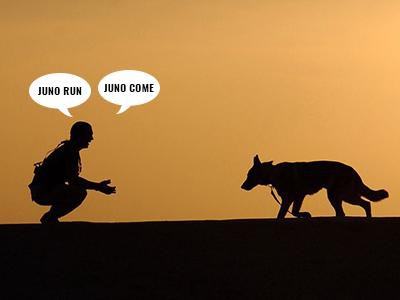 Does a canine’s name have the same strength to focus and attract the animal’s attention?

Yet, canine behaviorists and dog trainers are divided in this matter.

In dog classes, the correct approach when handling a canine would be “Juno come,” “ Juno run.” The reason was that calling the dog’s name first caught its attention. Then the next sound that follows its name is for the dog to pay close attention.

Many modern dog trainers would agree to disagree. They believe that there is no power in a canine’s name. Experts claim if the canine is listening to you, there is no need to use the dog’s name. Just giving the command does matter.

Many experts agree that calling a canine’s name will attract its attention. But, its name does not have any power on its own.

The name is something that makes the dog get attentive and stay alert for the trainer’s next command.

The Importance of A Dog’s Name

The importance of a dog’s name means it’s a sound that requires attention. Any sound preceding the instruction would work fine if the utterance sounds familiar.

These trainers state that a canine’s name, uttered by a different voice, should produce no effect or little effect in gaining the dog’s full attention.

A team of researchers carried out a series of experiments at a prestigious university. The researchers concluded that the canines paid more attention to the sounds resembling their name.

The results seem surprising: a canine’s name has power. The dog’s name attracts its full attention even under noisy circumstances.

This drives home the point that the technique of giving a command after saying the dog’s name first sounds good.

This has definite practical problems for search and rescue dogs. These dogs will respond to commands even given by someone else because of their training. They may do so in a multi-talker background.