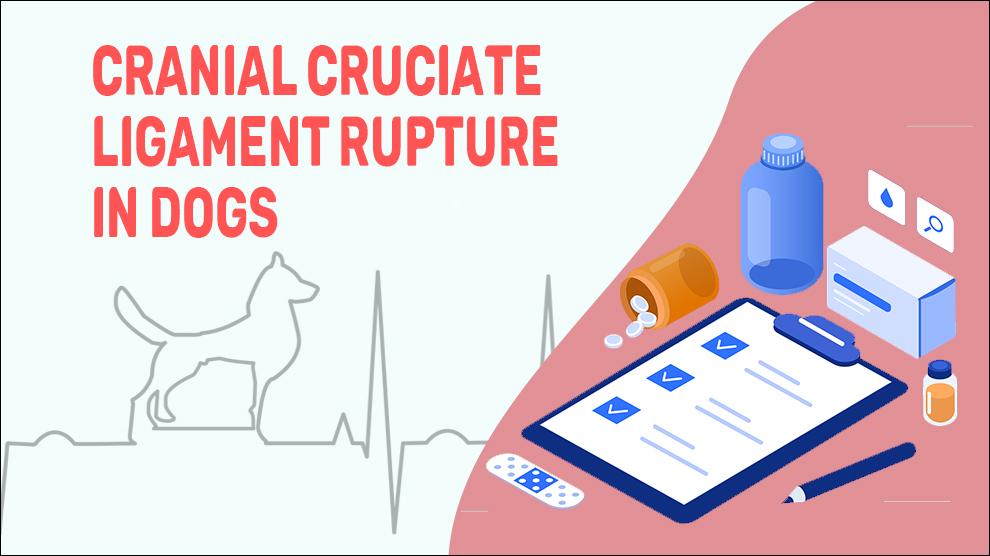 Several ligaments hold together the knee joint (such as the cruciate ligaments) and there is no such thing called joint interlocking bones. Like a hinge, this permits it to move ‘up and down’ but ‘side by side’ motion is restricted.

The most frequent reasons for cranial cruciate ligament rupture (CCLR) are ligament degeneration within the joint and trauma. Traumatic or acute cruciate rupture is a result of knee joint twist injuries. This happens when the running pet changes direction suddenly and the knee joint has to bear all the body weight. Disproportionate shearing and rotational forces are positioned on the cruciate ligaments. The CCLR will be awfully painful and result in unstable knee joints and lameness.

The complexity of canine of CCLR in dogs is more severe than in humans and they experience varying degrees of rupture (complete or rupture). Obese dogs and dogs with the luxating patella (and other knee problems) appear to be more predisposed to developing a cruciate rupture.

For mild cases of Cruciate Ligament Ruptures: Rehabilitation exercises, pain medication, chondroprotective agents (such as glucosamine), and making sure the affected dogs do not become overweight.

Tibial Plateau Leveling Osteotomy (TPLO): For rendering stability to the knee in the absence of the cruciate ligament, the tibial plateau is rotated and a near level oriented to approximately 90 degrees with respect to the attachment of the quadriceps muscles.

Tibial Tuberosity Advancement (TTA): The ‘tibial tuberosity (front of the shin bone) is advanced forward until the patellar tendon (that joins the kneecap) is oriented approximately perpendicular to the tibial plateau. This is another method to achieve the same mechanical advantage offered by the TPLO. So far, no published study reveals one method is better than the other.

Extra-capsular Repair: This technique is still the most popular procedure employed, while experts are concerned over its efficiency in dogs over 25 pounds. It works to stabilize the knee with artificial bands of material or securing implants and provides closer-to-normal mechanical stability. This is also called “lateral fabella suture stabilization,” the “fishing line technique” and Ex-Cap suture”. This technique is good for older, inactive, and small breed dogs.

The "TightRope": Another popular technique that is developed as an alternative to the extra-capsular repair. The specifically developed suture/toggle implant is placed through the holes that are drilled through the femur (thigh) and tibia (shin) bones.

The CCLR is irreversible without medical management and doesn’t cure on its own that is why vets emphasize surgical intervention.

CCLR has been linked to an inherited autosomal recessive gene although not yet confirmed. Therefore, the best method of prevention is responsible breeding practices.

Breeders should keep track of lineages with a lower-grade form of this disease and stop breeding the dogs.

The increase in the prevalence of CCLR is directly correlated to the overweight in dogs. The more they are above the optimal weight, the tougher it is on your dog's mobility.

Mortality due to CCLR is rare. While CCLR disease is not life-threatening, it is certainly life-changing. The restricted mobility and the pain in a dog’s daily life are something to be endured.

In addition to being painful and ubiquitous, ligament rupture signs are often ignored in its earlier stages; early detection and keeping an eye out for any abnormal actions, no matter how seemingly benign, is really important.

The signs can be really subtle. It can be something like what you’d call ‘lazy’ or sleeping a lot. If you’re not too sure or see any abnormal changes, seek your vet’s help.

With the prompt surgical procedures, almost 100% of these animals will be free of pain and become ambulatory.

Post-operative monitoring of the pet is especially important to make sure that they begin to use the surgically repaired leg. Most dogs after undergoing surgery will begin to bear weight within the first 1 to 2 weeks. This procedure can be postponed, particularly if there is a possibility of muscle weakening after the surgery.

In most cases, the veterinarian recommends post-operative physiotherapy to restore range of motion and strengthen the muscles.