“Prevention is better than cure” – As science advances, diseases also multiply in high numbers. If this continues, you cannot find treatment for all the diseases.

So, it is always better to prevent them instead of getting rid of the diseases. Let’s be aware of the worldwide deadly disease called “heartworms”.

Heartworms are nothing but parasites that are transmitted by mosquitoes and can affect any livestock. But, they are more common in dogs as canines are the natural host to these worms.

Like any other disease in canines, it can be treated. But, it is too difficult for your dog to get rid of this deadly disease because these heartworms will cause more damage to the dog’s lungs, arteries and the heart even after their absence.

So, it is wise to prevent your lovable dog from not getting heartworms.

Can I prevent my dog from heartworms? How to treat my dog with heartworm positive? How much does the treatment cost? Let’s find the solutions to all the questions in your mind.

How Do Dogs Get Heartworms? 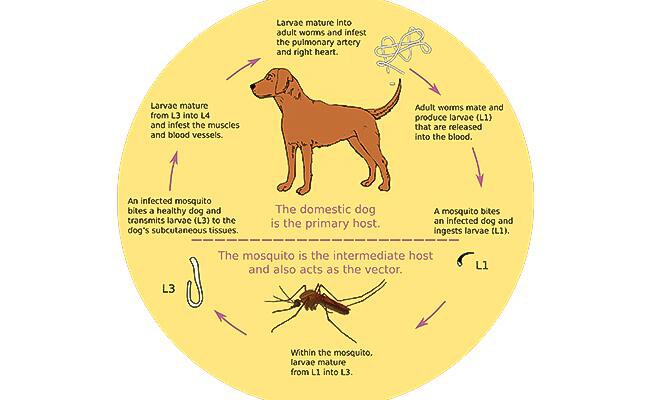 It is essential to know from whom and how does your dog get heartworms. That’ll help you in the prevention of this deadly disease.

Dogs get heartworms only from mosquitoes. Heartworm disease or Dirofilariasis is caused by the parasite “Dirofilaria immitis”.

As dogs are the natural host to worms and parasites, they will easily enter the dog’s body if a mosquito bites the dog after it gets infected by D. immitis. After biting, residues on the mosquitoes’ mouth will carry the immature worms (microfilaria) to your canines.

Those immature worms travel via the bloodstream and settle in the right side of your dog’s heart in a time span of about 2 months and grow from there. They mature in six months and constantly produce offspring as well.

Now, take a look at the lifecycle.

The life cycle of heartworm begins when a female mosquito bites a host infected with D. immitis larvae. 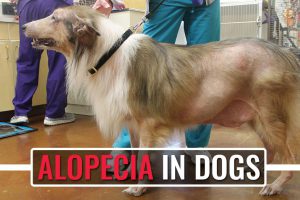 The Disorder Where Dogs Lose Their Hair In Patches Is called “Canine Alopecia”. Check Out The Causes, Symptoms, And Treatments For Alopecia In Dogs.
Read More
Back to Index

Symptoms Of Heartworms In Dogs

If your dog is having heartworm disease, it won’t show any signs of the disease in the early stage. But, you can identify the heartworms in dogs through common symptoms such as coughing, poor body condition and intolerance to exercise.

As heartworm disease has four stages, the clinical signs will be different at each stage.

First Stage – Dogs having Stage 1 heartworm disease won’t show any symptoms generally. But, they may have a mild cough occasionally.

Second Stage  – At Stage 2, dogs will have a persistent cough and they don’t tolerate even a minimal level of exercise.

Third Stage  – You can identify the dogs at stage 3 heartworm disease through the symptoms such as dry or greasy hair, weight loss, labored breathing, decreased appetite and swollen belly due to the right side heart failure.

Fourth Stage  – Dogs having stage 4 heartworm disease is identified with caval syndrome. It is a clinical condition in which the blood flow to the heart may be blocked by plenty of heartworms and the signs are pale gums, dark coffee-colored urine and labored breathing.

Dogs at this stage will die usually because you can’t treat them due to the disease progression.

Although heartworms in dogs can be identified with a few symptoms, it is always better to diagnose it clinically. According to the American Heartworm Society, one or more simple blood tests will tell you about the presence of microfilaria in dogs 6 months after they are bitten by mosquitoes.

This test helps the vet to know the presence of microfilariae in the dog’s bloodstream. After centrifugation of the blood sample, it is examined through a microscope.

The test result is positive if any microfilaria is present and can be negative in ~20% of cases because of the dog’s immunity. The severity of the infection is based on the number of microfilariae and the sampling time as well. The fact is that microfilariae will be high in the evening and during summer.

As any other deadly parasite can also be present in dogs and difficult to separate it from heartworms, the antigen test is essential.

It is the most common test to detect the antigens produced by adult heartworms. Collect the blood sample of your canine and perform the test on the sample.

The test result can be positive in ~20% of cases where no microfilariae are found in the bloodstream. It can be negative when your dog has <5 adult heartworms or it is at the early stage of infection.

Dogs with less number of parasites are unable to produce enough antigens to the test result become positive. The result can also be negative if the dog contains only male heartworms as the female is only producing antigens.

Therefore, it is essential for the dog to have at least 4 to 5 female worms for the test result to be positive.

The American Animal Hospital Association says the average cost of treating the disease will be around $400 to $1000. But, you can prevent the disease at the cost of $5 to $15 per month.

UTI In Dogs Can Lead To Grievous Consequences If Not Treated At An Early Stage. Know The Symptoms, Causes, Treatments And Prevention Tips.
Read More
Back to Index

How To Treat Heartworms In Dogs?

Once your dog is diagnosed with heartworm, it is essential to know whether the dog is able to undergo safe treatment for this disease. So, the following tests are recommended before the treatment starts.

Complete blood count tests are useful to determine the function of the dog’s vital organs and its health status before treatment. Abnormalities in these test results will clearly indicate whether your canine’s kidney and liver are functioning properly or not.

It is an ultrasound examination of the heart. With the help of echocardiography, the vet is able to know the health status of heart chambers and visualize worms.

It is a procedure to trace the electric currents generated by the heart in order to identify abnormal heart rhythms and to detect whether the heart chambers are enlarged in size. This procedure is much important to determine if your dog can undergo treatment safely.

The vet uses radiographs or X-rays to detect swelling and enlargement in the pulmonary arteries. The vet is also able to know the condition of your dog’s vital organs such as lungs, heart, and pulmonary vessels. With the help of this information, the vet can predict the possibilities of complications related to treatment.

This will show the wriggling worms and the abnormal organ shape.

Although the dog is diagnosed with heartworm and it is safe to undergo treatment, the level of treatment depends on the severity of the disease. Here is the step-by-step treatment procedure for you to take a look at it.

Restriction from exercises before and after treatment is important for the treatment’s success. A dog having heartworm will be unable to do exercises. Also, involving physical activities will make the disease worsen. So, you should keep your doggy in comfort.

Caring For Dog After Heartworm Treatment

It is important to take care of your canine after the treatment to get a complete cure. As discussed, making your dog free from exercises before and after treatment is essential.

Because your pal’s heart and lungs are compact sizes and so it will be at an increased risk of developing inflammation in its vital organs. Exercise also demands oxygen and increases heart rate. So, your doggy’s heart needs rest during recovery.

Other than that, you have to follow a few instructions. So, we have compiled a list of them here.

How To Prevent Heartworms In Dogs

Your dog has the chance to get deadly heartworms again even after the treatment. So, yearly testing of heartworm disease and prevention is essential.

Also, the treatment for this disease is a hard procedure and risky at times, the veterinarians are insisting your doggy take preventative medicines. Scientists call these preventative compounds chemoprophylaxis.

Plenty of preventative medications are available for this disease. But, not all are 100% effective. Consult the vet before giving these medicines to your doggy though they are effective and safe for your canine.

After the treatment for heartworm disease, your dog will need preventatives to avoid getting infected by D. immitis again. Preventatives will also fight against hookworms, roundworms, tapeworms, and fleas.

Now, take a glance at each of the preventative medicines listed here. Have a discussion with the vet and choose the best one among them.

As per the vet’s advice, you have to properly give the medicines to your canine without missing dosages.