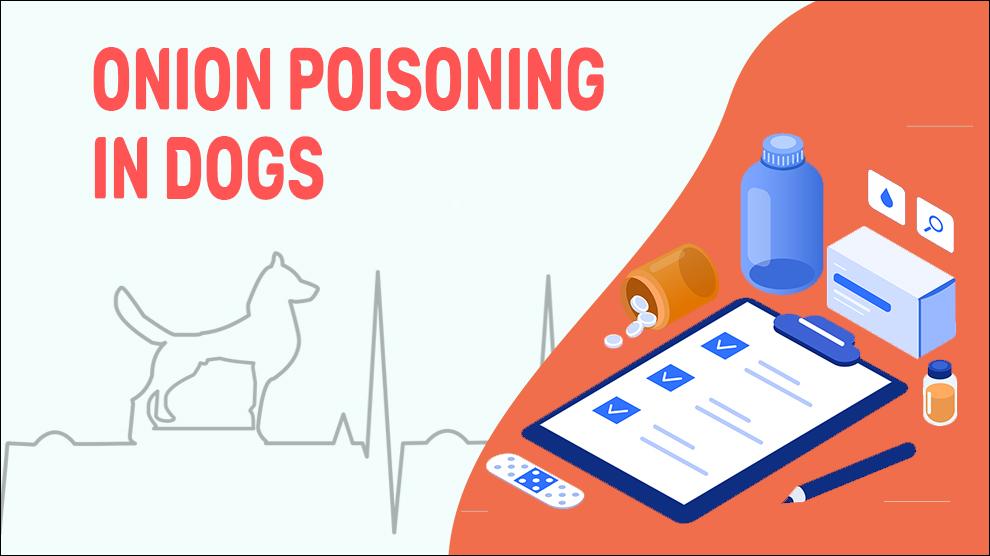 Onions not only make us cry, but they also make our pets cry too!

All onions - red, yellow, white, and green - can cause onion toxicosis in your dog. It doesn’t matter whether the onion is raw or cooked - all parts of the onion, including the flesh, leaves, juice, and skin, are dangerous for your dog. Additionally, onion powder is unsafe and other forms - juiced, dehydrated, dried, and fried are risky as well.

The reason onions and other allium family plants are dangerous is because it doesn’t take a lot to cause health problems in dogs. The Allium family is quite a large family of plants with approximately 95 species of plants including garlic, shallots, leeks, chives, and scallions, not counting ornamental varieties. 5 grams of onion per kilogram body weight (0.5% of the animal's body weight) can cause toxicity in dogs.

For example, 50 grams of onion (this is only a quarter of a medium-sized onion) may not do anything for a 150 - pound mastiff, but for a 10kg, Bichons Frise or a tiny Yorkie symptoms may become apparent.

Another example, think about a 30 kg Labrador consuming 150 - 200 g of onion or onion product - that’s the size of average onion - the risk of poisoning is apparent.

One-time or sporadic ingestion of a small piece of dried onion or onion products isn’t enough to cause health concerns such as severe anemia in your dog. However, eating a plate full of sliced onions or repeated small doses over time is a cause for concern due to accumulated toxicity.

When your dog is fighting hemolytic anemia (due to onion toxicity), do not try to use any home remedies.

The home remedies for anemia in dogs start with providing their body with enough nutrients to facilitate the synthesis of RBCs.

Undoubtedly, you will have to incorporate nutrient-rich foods rich into your diet.

Ask your veterinarian for advice about a special diet for your dog.

These Susceptible traits can make certain dogs more susceptible than others.

Allium family plants contain N-propyl disulfide (an organosulfur compound) found in almost all parts. The enzyme to digest this sulfur compound is not present in dogs. What’s the big deal! You’d guess that dogs just would poop that outright? Not really.

The oxidizing agents in the plants cause oxidative hemolysis as the sulfur compound binds with the dog’s RBCs. When they undergo oxidative damage, the oxygen-carrying capacity throughout the body is hindered heavily. Oxidation of beta-93 cysteine residues present in hemoglobin forms sulfhemoglobin. Due to sulfhemoglobin's lesser solubility than hemoglobin, it precipitates, collects, and combines with the cell membrane to form specks called Heinz bodies.

This is the disclosing sign on a blood smear for hemolytic anemia and/or onion poisoning. It is similar to a rounded, purple bead above the red blood cells under microscopic view.

Now the battle begins inside the dog’s body. Heinz bodies are considered trespassers and they are attacked by the immune system. Don’t forget that these are dogs’ own RBCs that are now considered the imposters. This destruction of own RBCs is called hemolysis.

If left untreated, RBCs’ will be destroyed faster than the body can replenish and the body’s ability to provide oxygen to the tissues as well as organs is diminished. When the quantity of oxygen needed to continue organ or system functions is not provided, sooner or later, everything burgeons into a deep anemic state.

If large amounts have been ingested, Onion toxicosis may manifest within one day of consumption; however, most common clinical signs develop after a few days.

This includes other common toxicoses:

When a dog consumes onion or onion products of more than half a percent of its body weight, it would be at the risk of poisoning and if left untreated, it would be fatal.

Mild exposure to onion or onion products has a good prognosis and the dogs will recover soon. Increased consumption of onions can be serious, particularly without appropriate treatment. When you suspect that your dog has eaten an excessive amount of onions, rush to the vet immediately even if there are no instant signs.

Even a small amount of onion in food, if given frequently, is a reason for great concern and could cause severe anemia for your pet.

Although the size, breed, age, and overall health determine the onion toxicosis levels, there is no such thing as called a safe amount of onion for the pet.

Large breed dogs that consume small amounts of onion may evade onion toxicosis better than smaller dogs. But it is better to NEVER provide onions (in any form) to dogs.