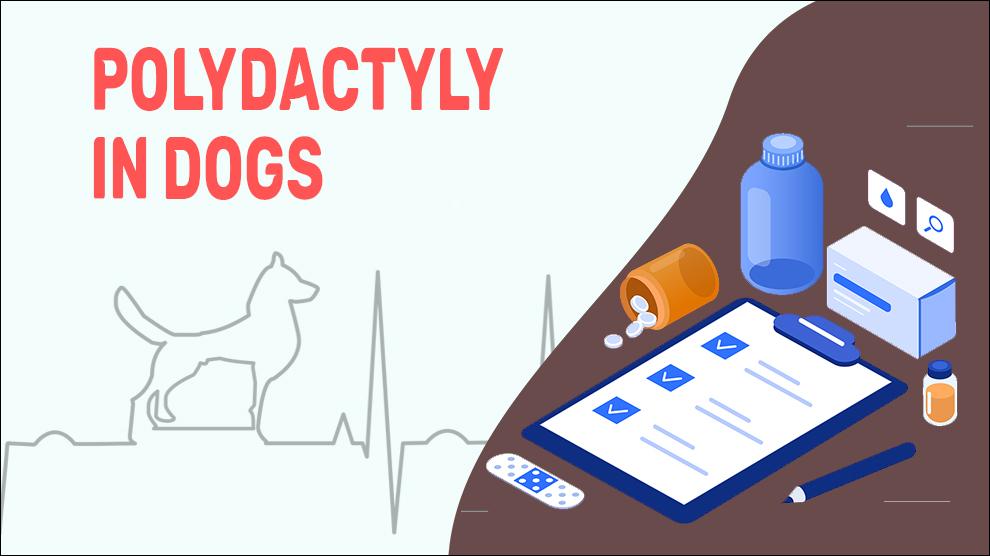 No one ever spares time to think about how many toes a dog has?

Take a look at your dog's paws. Most dog breeds have 4-5 toes (which include 4 regular toes and 1 dewclaw) on the front legs and 4 each on their rear foot. Though, there is an exception.

Certain breeds have a little anatomical oddity with one more toe on their back feet. Actually, some of them have two!

Polydactyly (also known as canine preaxial polydactyly or hyperdactyly) in the rear legs (rear or hind dewclaw) is a congenital trait in which the digit loss during canine evolution gets reinstated. Simply, Polydactyly is a genetic aberration when your dog has an extra toe or toes at birth. (Poly means many, and dactyl means digits). Typically, the polydactyly digit is positioned higher on the leg separate from the remaining toes.

Polydactyly affects both the fore and hind limbs. This doesn’t really seem like a toe at first glance; when the dog walks, it usually doesn’t touch the ground and it appears only floppily connected to the foot.‘The odd ones’ are not considered a problem unless getting trapped on fences or injured while running. Many breeders remove them in the first week of age.

Few breeds, such as the Norwegian Lundehund (Puffin Dog) and Great Pyrenees, on their hind legs, have one or sometimes two dewclaws naturally. They are due to recessive genes (non-X-linked) and are considered to be a part of breed type. The veterinary term is hind limb specific- preaxial polydactyly and breeders call them “double dewclaws” or ‘rear dewclaws”.

When your dog has more than the normal number of toes, they are considered polydactyl

For dogs over 6 months old:

Surgical removal is not mandatory. If you see decide not to operate, you must keep an eye out for any discomforts or any other developments on the extra toes.

Discuss with a veterinarian any home care specific to your dog’s situation.

PDCV/PD: One copy of variant of LMBR1 PD allele (PDCV) that causes polydactyly in many breeds.

PDCV/PDCV: Two copies of the LMBR1 PD allele and passes 100 percent of its abnormality to its offspring.

Screening of Dogs that inherit one or two copies of this variant is helpful to find polydactyly offspring. However, there are some other genetic factors are associated with different types of polydactyly in other breeds.

Mutation of LMBR1 is not the cause of Polydactyly in the Great Pyrenees. In this breed, Polydactyly is associated with ALX4 gene mutation and it cannot be detected by this test.

In dogs, the formation of limbs happens from the weeks 4 – 8 weeks of gestation. Canine Polydactyly is often considered to be caused by a genetic mutation by the way of differential expression of genes or mutations of certain genes.

Preaxial polydactyly (PPD) is caused by the variations in the limb development ( anteroposterior patterning) and due to the autosomal dominant entity with variable penetrance (Horikoshi et al, Hill et al- 2003).

Inherited: The extra toes are due to a rare autosomal recessive inheritance. Norwegian Lundehund is an example of proper polydactyly with six fully developed toes (rather than the usual four) - of which four are forward-pointing and two face inward. The toes are complete, fully jointed, and muscled. This dog excels at climbing narrow rock faces where it originally sniffed out puffins and their eggs.

Acquired: The dogs are bred intentionally to exhibit this trait. Most of the Rottweiler dogs present in Sri Lanka have polydactyly due to inbreeding for a long period.

Polydactyly is not considered a setback unless it catches on to things. When the toenails are not clipped routinely and the pet catches on things while on move, then it becomes a problem.

As the dog can either suffer from muscular damage (tearing the toe from the limb) or get injured by being caught and stops suddenly.

There is no such mortality associated with Polydactyly.

X-ray- to check how the extra toe or toes are attached.

Usually, the extra toe is mostly soft tissue with some bone and not fixed to the skeleton. The extra appendages only become a hindrance if it catches on to things causing wounds. All the dogs can use their toes after surgery with a full range of motion.

Feed the foods best for your dog’s overall health.

Always monitor your dog’s response with the extra toes regularly and take adequate measures to protect your dog from injuries.