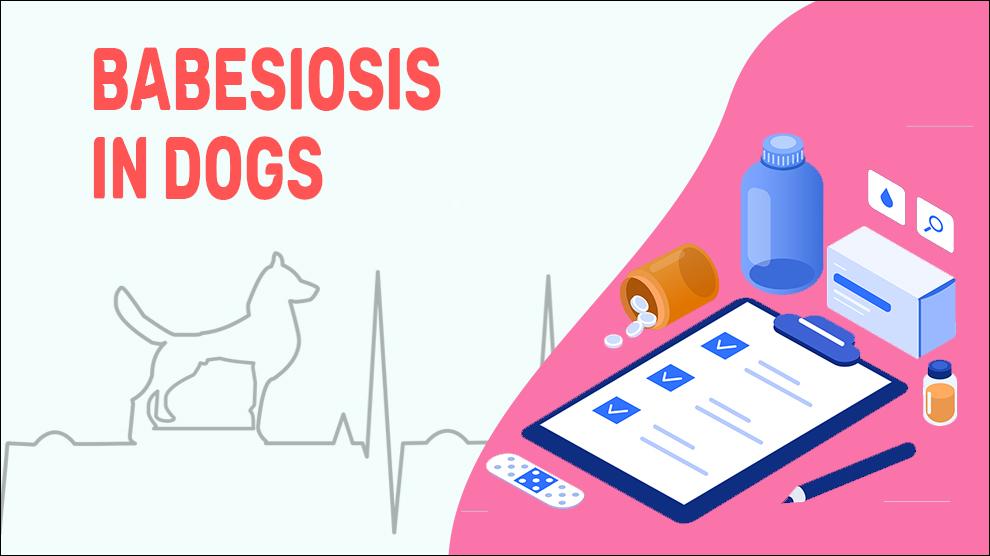 What is Babesiosis In Dogs?

Canine babesiosis is a tick-borne, protozoal, intraerythrocytic, hemoprotozoosis. Many strains of Babesia that infect a wide variety of animals have been identified.

The severity of infection varies significantly depending on the species of Babesia concerned, as well as the immune status of the infected dog.

The two hosts for the parasitic transmission of Babesia are invertebrate (tick vector) and vertebrate hosts. Dogs of all ages are susceptible to Babesia infection but young puppies are at more risk. Clinical evidence now reveals that there are possible vertical transmissions too.

The clinical signs and pathogenesis of canine babesiosis are similar to human falciparum malaria. Canine Babesia species zoonotic importance is still not documented. However, the possibility of zoonotic transmission cannot be ignored.

Symptoms Of Babesiosis In Dogs

Treatment Options For Babesiosis In Dogs

Azithromycin + atovaquone or Clindamycin (B. gibsoni)

Home Remedies For Babesiosis In Dogs

The best treatment for your pet will be based on the manifested symptoms. The quick fixes or just treating symptomatically without finding the source often leads to the development of resistant infections or in the case of babesiosis, it may be sub-clinical before/after treatment and they may suffer a relapse when the dog immune system is weak.

How to Prevent Babesiosis In Dogs?

There is no breed or sex predisposition. Prevalent in young puppies

Additional Facts For Babesiosis In Dogs

The most virulent species is Babesia Rossi and occurring mainly in southern parts of Africa.

Babesia canis is widespread in Asia and Europe (intermediate pathogenicity)

The least pathogenic species is Babesia vogeli and it occurs in the USA, Australia, France, Japan, South Africa, and Brazil.

The degree of the infection depends on the species of Babesia, age, any coexisting infections, and the immune response of the host.

The disease presentation varies widely from acute, and peracute to subclinical, or even chronic.

When To See A Vet For Babesiosis In Dogs?

The dogs diagnosed with babesiosis have a guarded prognosis based on what body systems are affected at the time of diagnosis.

Pet parents should be aware that dogs may be sub-clinically infected without any symptoms. Proper identification of the infectious species is important for treatment planning and prognosis.

So it is better to contact the vet for further suggestions

Boil the chicken pieces in a pot with water. Add rice to the water after some time. When this is fully cooked, simmer the ingredients. Add the pumpkin after the ingredients in the pot is completely cooled.

Store it for up to 5 days in a fridge and feed your pet as needed.

Diagnosis of Babesiosis can be challenging as Babesia organisms may not always show up on a smear. The diagnosis is further complicated by the fact that Babesiosis dogs may also be infected with other tick-borne diseases, such as Lyme disease, Rocky Mountain spotted fever, or Ehrlichia.

Sometimes, treatment may relieve the babesiosis symptoms, but seemingly in many cases, it does not fully eliminate the bug from the body. This may be considered a latent infection and in times of reduced immune function or stress, Babesia can flare up again

Given that the understanding of the pathogenesis of Babesia is still improving, the treatment of Babesia infections may not continue challenging for a long time.