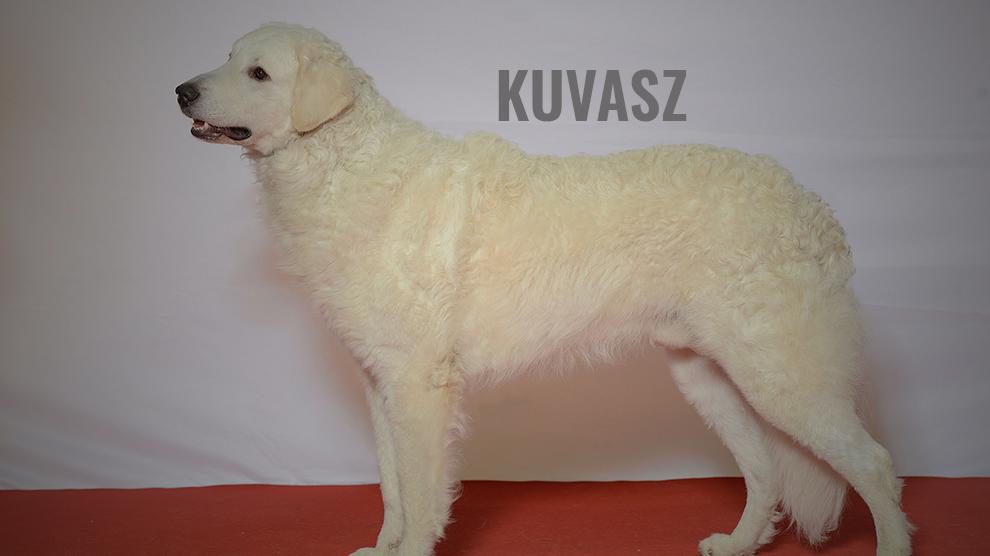 Majestically good-looking and fiercely loyal, it is no wonder that the Kuvasz has a history amongst royalty.

Originating from Hungary, a cuddly white fluffball as a puppy, the Kuvasz (pronounced KOO-vahss) matures into a bold, spirited dog, determined to protect those who are beloved to him.

Kuvaszok (the plural of the breed name) are gentle with people, children, and other pets in his family, but they are not a schmaltzy, palsy-walsy kind of dogs.

Strangers and uninvited guests will not get a warm welcome; he can also be aggressive toward dogs he doesn’t know.

And for bad reasons. This dog only does his job which people bred him for: to protect his master, his family, and its values. 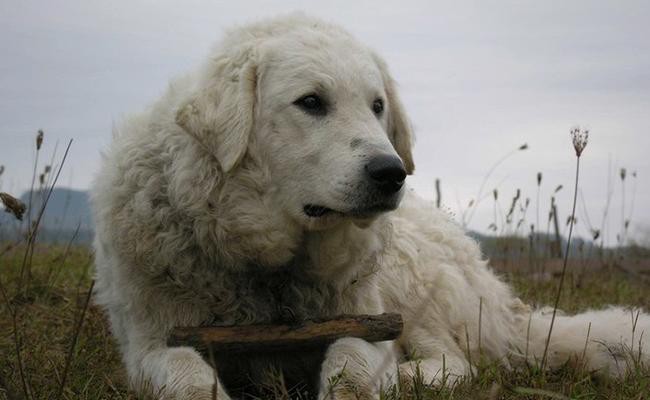 Of the ancient Hungarian dog breeds (the others being the Komondor, Puli, Mudi, and Puma), the Kuvasz is most likely the oldest and first breeds to find his way into the cities and suburbs adapting himself to modern-day living.

There are a few theories floating around about the origin of the name Kuvasz. Some believe as a corruption of the Sumerian phrase “Ku- assa”, which means ‘a dog that guarded and ran alongside horses and horsemen’.

Some believe that the name originates from the Turkish word “kawasz”, which means bodyguard.

Another theory is that the name originates from the Arabic word for an archer, “kawwasz”, signifying the excellent guarding instincts of the breed.

Archaeologists believe that they might have arrived with the Magyar tribes during their invasion of the Carpathian Basin in 895 AD.

By the 15th century, the Kuvaszok (plural of Kuvasz) were highly prized as guard dogs. King Matthias Corvinus I, crowned in 1458 at the tender age of 15, was particularly fond of this breed.

In a time when a king couldn’t even trust his own family had at least a brace (two) of Kuvasz with him all the time and many more wandering his palace and surrounding grounds.

King Matthias established his own breeding program and built exclusive kennels on his estate at Siebenbuergen. They developed a large hunting pack of Kuvasz to hunt large game such as wolves and bears.

Kuvaszok puppies from Kings Royal Kennels were often presented to favored nobles and honored guests as gifts. After Matthias’ death, the breed returned to its original duties for commoners and peasants, primarily guarding livestock and farms.

Why was Kuvasz crucial for the semi-nomadic Hungarians at that time?

The Hungarians had cattle, horses and other flocks which they had to protect from thieves, wolves and other predators. Only two large, white shepherd guard dogs (the Komondor and the Kuvasz) were enough to protect a large herd.

They were used to protect people, herds, flocks, and studs from robbers and predators.

They were also used for hunting during the age of Árpád to the beginning of the 10th century (and even during king Matthias time). This proves his versatility that this dog was also used to wild boar and bison hunting.

So, it is right to conclude that it isn’t just any kind of dog breed. 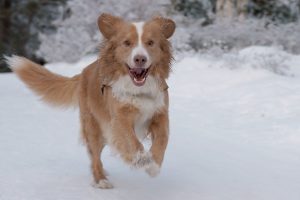 The average Kuvasz life-span is about 10-12 years which is relatively modest particularly when compared to other large breeds.

They have a double coat consists of a thick, woolly, downy undercoat and a straight, coarse, a fairly short outer coat. The texture of the guard coat is medium coarse so that they readily shed dirt and shows no tendency to mat. The coat color is silky white.

Some coats have smaller, tighter waves. Some have long, loose waves and some have anything in between. Distribution follows a definite pattern over the body regardless of coat type.

They have well-balanced Body proportions neither lanky nor cobby. Medium boned, well-muscled, sturdily built with dry joints. When viewed from the side, the trunk and the limbs form a horizontal rectangle a little strayed forming the square.

He possesses grace and light-footed agility, with no hint of bulkiness or lethargy.

The wedge-shaped head is with a fairly broad skull and slightly rounded forehead. When viewed from the top, the head is slightly tapered, gradually and smoothly, from the ears to the nose.

When alert the ears may move slightly toward the front but never rise above the head, fold lengthwise or cast backward.

They have a well, muscled and slightly arched body. 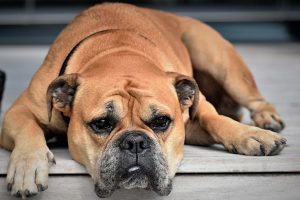 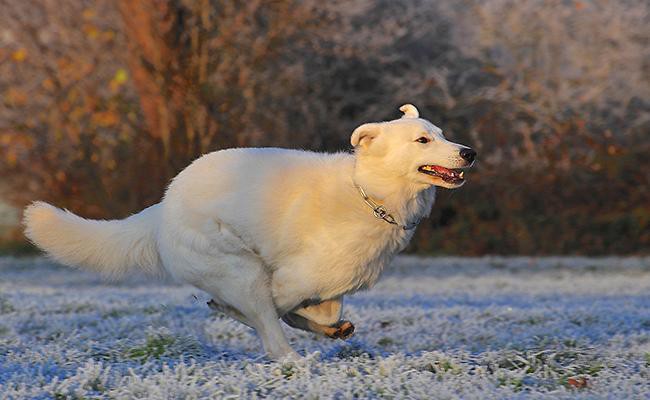 Kuvasz has a reputation for being a fierce, aggressive guard dog.

They are territorial, especially when it comes to their home, family, and livestock. The breed tends to be independent, impulsive, determined and has a strong sense of self.

They possess the ability to act on their own initiative which they have done for thousands of years of work at the rough terrains of Hungarian plains. They are extremely brave to the point of self-sacrifice.

You can blindly trust their watchdog abilities because they have been guarding people and property since the time of Sumerian ranchers.

Primarily a one-family dog, nothing much bothers the typical Kuvasz when their character is often misunderstood.

They are gentle with older kids and other animals, wanting only to take care of them.

Despite their wild beginnings, generations of working as a protector for livestock and people have produced a gentler disposition with a temperament of controlled aggression and fearlessness, tempered with patience and loyalty.

These dogs are not submissive creatures or lapdogs, clinging to your heels all the time and constantly looking for instruction, but they are inquisitive.

They are strong-minded, independent and can seem aloof; nevertheless, they bond naturally to those who care for them. He likes to spend at least part of his time with his family rather than being left alone in the backyard. He is not a “good backyard dog.”

Is Kuvasz Recommended For First-time Owners?

With his majestic appearance, pleasing colors and adorable coat, the Kuvasz is sure to be a conversation starter as you walk him down the street.

But if that’s all you’re looking for in a dog, this is not the breed for you. They need to be handled and trained by people who are familiar with the particular needs of this type of large, intelligent guarding dog.

Moreover, they have a strong mind of their own and can have dominant tendencies.

Who Gets Along With Kuvasz Dogs?

Kuvaszok can be a fantastic breed for a proper home and experienced owners, but he can’t just fit into any routine, just like that.

Those who are interested in this breed should do their homework and first-time owners should talk to breeders and other experienced owners before getting one.

They absolutely must have early, continual and extensive socialization.

We respectfully suggest you select one of the more naturally people-friendly breeds.

The dogs that are not properly socialized or trained may develop aggression toward other pets/animals, and makes them unsafe if they don’t know how to interact with them.

Proper socialization of your Dog to other animals will help ensure that your dog has a happy, healthy life. It is not as hard as it seems, all it takes is just a little time, consistency, patience and little love.

The Kuvasz has a lot of furs, thanks to his lustrous, dense double coat made up of a heavy, soft, woolly undercoat and a heavy, thick, coarse-textured outer guard coat.

Hi, fur is wavy, medium-coarse, slightly rough in texture and does not mat. but still, Brush your dog with a wire slicker brush two to three times a week in order to get rid of loose and dead hair.

Make sure to check for mats or tangles in the place where the coat is heaviest- in the mane, breeches, and tail.

Apply a little corn starch with the soft side of a pin brush and then brush out. This will whiten the coat and counteract any unpleasant smell he picked up in shoulder rolling in the dirt.

Like any other dog, cleaning teeth, nail clipping, checking ear should be done regularly. Don’t forget that he sheds regularly; however, cleaning can be easily done with a good vacuum cleaner and a lint brush.

Kuvasz coat is not quite as hard to pick up as Dalmatian or Labrador hair.

A typical, healthy Kuvasz should be fed about 20-30 calories worth of food per pound of body weight. Always watchful of the quantity and the quality of meals you feed.

– For kuvasz with a more sedentary lifestyle and for older dogs, they may need fewer calories – 2000 calories

The feeding generally depend on the dogs build, health, food sensitivity, eating tendency and activity level 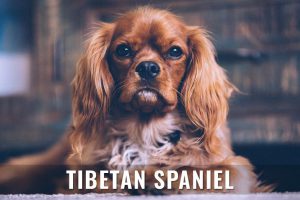 Tibetan Spaniel – Facts You Need To Know About The Breed

Tibetan Spaniel Came Into Existence Long Before 2500 Years Ago. Check Out The Size, Lifespan, Temperament, Price And More Facts Of This Perfect Watch Dog.
Read More
Back to Index

Breeders in the USA