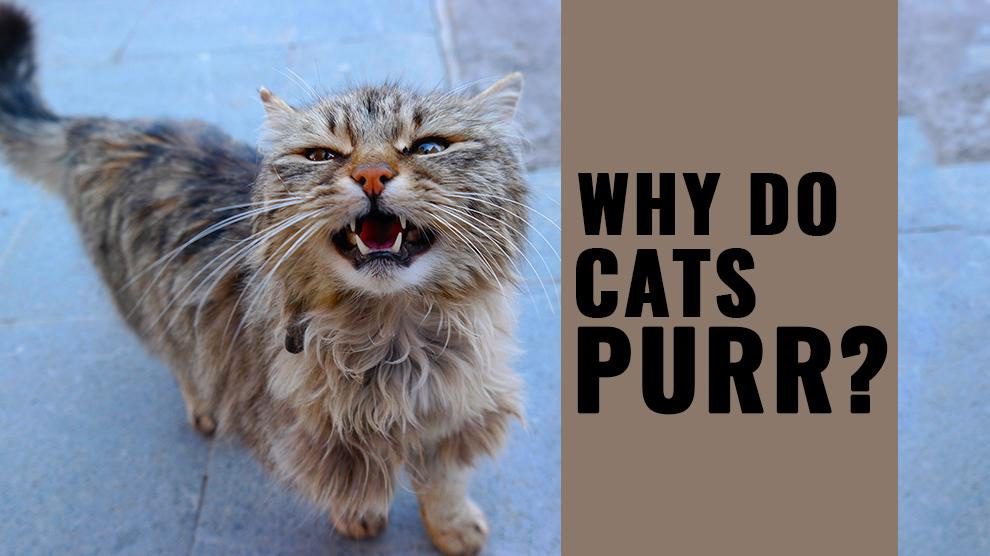 We may all have heard the phrase “the dog is the man’s best friend”. No one knows where the saying comes from but the statement stuck for centuries. Well, if the dog’s popularity is anything to go by, perhaps that’s true.

However, that’s not for everyone! A lot of us out there are cheering for ‘Team Cat’!

There’s a false impression that cats are curmudgeons who don’t make friends. Yes, cats can be kind of little aloof. But to us, they’re purr-fect.

Actually, the brain structure that controls their emotions is almost identical to ours! That may be why we so easily forgive our feline friends for all sorts of behavior. Deep down we know that our sweet kitties truly love us.

Do you think you understand your cat purr-fectly? You need to double-check.

If your furry friend is purring away, it doesn’t have to be always hunky-dory.  It’s easy to assume that cats purr because they’re happy but you will be missing out on how multifaceted a purr truly is.

After all, when your kitty contentedly curls up in your lap for some well-deserved rubs and scratches, she’s obviously one happy feline.

The cat purring is not as simple as a human smiling or a dog wagging its tail merrily; it’s more complicated than that.

How Do Cats Purr? 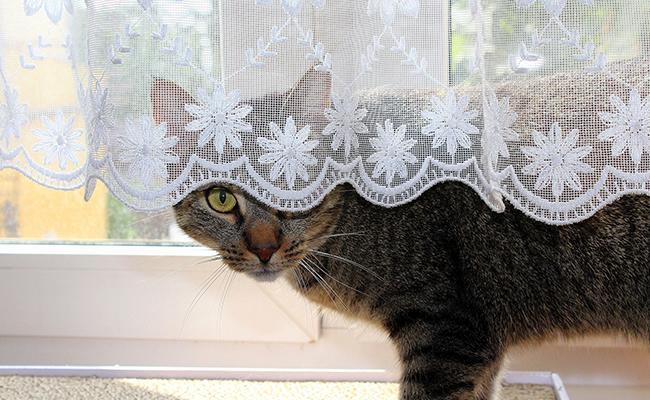 Before, “Why do cats purr?” let’s talk about how cats purr.  How they do it is somewhat of a mystery and there are a few theories explaining the purrs.

The theory that stands up the strongest states that cat purrs are produced through a combination of the laryngeal and diaphragmatic muscles signalled by a “neural oscillator” in the cat’s brain. This theory makes some sense, as cats which have laryngeal paralysis cannot purr.

A second theory claims that the small hyoid bone which is located between the skull and the larynx is responsible for cat purrs.

Another theory states that purrs kick off from the central nervous system. Cats will purr for many different reasons and in many different situations, often varying the intensity and tone.

These purrs are still acoustically analyzed and every cat has their own unique purring sound.

Why Do Cats Purr? 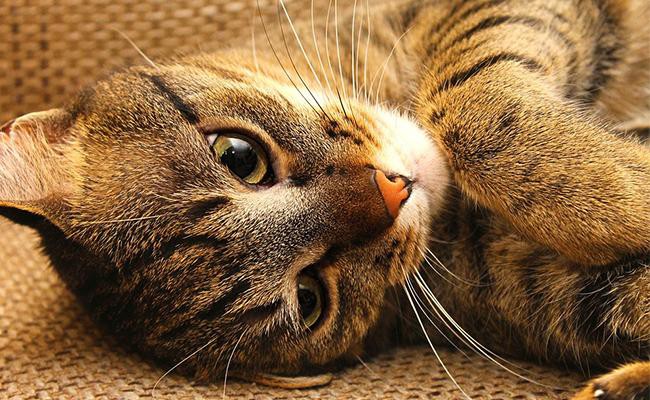 It is perhaps the most identifiable sign of contentment: a pleasing rasp that erupts whenever a cat is petted or snuggled up, the soundtrack to countless sessions sprawled on a parents lap in a comfy environment.

Purring when lying in the sun, nuzzling up to a favored feline friend are few examples of situations that seemingly represent true feline contentment.

It’s a way of showing that they’re happy and contented. This could be when seeking or receiving attention from the humans they love or other pets in the family.

The sound of the cat’s purr near us generally makes us feel more comfortable since we connect purring with contentment. We begin stroking the purring the moggie and that exchange will be really calming.

Feline behaviourists believe that purring is vital for the survival of newborn kittens and enhance the bond between mom and kitten, as both will purr during nursing.

These sweet vibrations guide newborns as perfect homing devices and provide the protective warmth of mom’s body and to their first meals.

This Primal Purring also helps keep them safe from predators and these vibrations are not as easily detected as meows and other vocalizations.

It also makes harder for predators as this primal purring helps keep neonates safe from predators. Kittens start communicating back to mom and their siblings by purring when they are two days old.

These little purr machines sometimes purr when they’re kneading on the couch to mimic the nursing action when they were kittens.

Although we generally associate ‘separation anxiety’ with dogs, cats are equally prone to similar feelings of loneliness and frustration when left alone for long periods of time.

Households with only one cat and the ‘innie’ cats that don’t venture outside are likely to have bigger problems with loneliness.

A recent study by the University of Sussex in England concludes that many kitties may use a special kind of purr for soliciting food and attention from their favorite people.

Researchers state that this Soliciting Purr is an elusive mix of normal purring and a cry that has a similar frequency of the crying of a human baby.

The soliciting purr is not employed by all the cats, but it seems that some have learned to use it after experiencing success at getting what they want.

In a research paper “The cry embedded within the purr” published in ‘Current Biology’, Author Karen McComb has stated that the solicitation purr includes an element absent in the normal purr.

And that this element is judged by listeners (or owners) as more unpleasant and more pressing than a normal purr.

McComb suggests an example that the cats may be cashing in on human’s naturally nurturing response to a baby’s cry. Although not every solicitation purring is unpleasant.

In fact, it’s kind of cute (unless you’re asleep). Since most cat-parents lavish attention on their cats when they purr, a cat’s purr is the ultimate companionable sound.

When you’re sitting with a tenderly purring kittie, it’s simply impossible for you to feel lonely and abandoned. 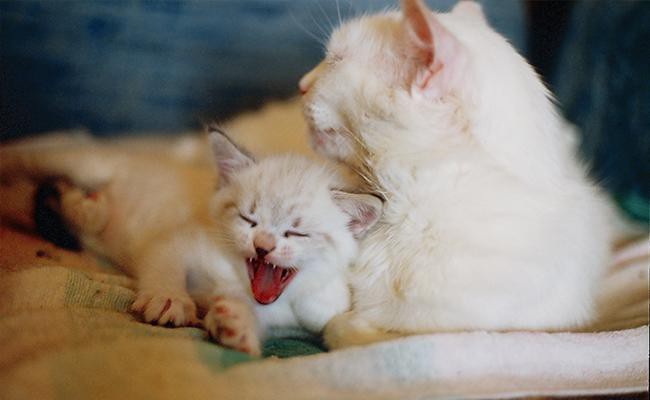 Cats also purr when they are upset, when in pain or severely ill. Often, dying cats will purr.

A cat that is nervous, stressed or feels insecure may respond by purring and may feel some comfort by doing so. This should be the feline equivalent of whistling in the dark!

Inappropriate purring (purr at odd moments) has tickled the curiosity of the scientific community for years.

Studies find that purrs are in between a low frequency of 20 to 100 HZ. These frequencies ease muscle pain and promote bone healing.

Clinical trials of people receiving ultrasound treatments have proven that bone responds to 25-50Hz and skin and soft tissues to around 100Hz.

Perhaps this is why there is an age-old adage which says “cats have nine lives”. This may also explain a very old joke among the vets— if a kittie has a broken bone it is likely to heal as long as the two pieces are in the same room!

There are also reports that cats heal faster than other animals that do not purr, and that purring releases feel-good endorphins.

So experts think Purring is the feline equivalent of expensive ultrasound treatments, without medical bills. This could mean that while enjoying some cosy cuddles from their parent, purring also heals their pain or it might help calm their nerves.

Something for you to think about at the next snuggle session with your kittie. Looks are deceiving — in fact, she might be seriously engaged in callisthenics.

Cats may have a reputation for being aloof, they’re independent, the internet’s in love with them. And there are enough scientific proofs that having a feline roommate provides things to support good health of others around them.

There are innumerable reports of cats coming over to sick humans and purring for them, sometimes for extended periods of time.

Besides, there are many poignant accounts of cats maintaining purring vigils for their fellow companions, including dogs and rabbits, which are in dire straits or sick.

When dispensing therapeutic purrs to their “patients,” cats usually cuddle next to them as well, for amplifying the effect.

This may sound like simply the ramblings of a besotted owner or the plot to your favorite Disney film but over the year’s research into the mystery of the cat’s purr has backed up these curious stories.

In households with multiple cats, most of the purring is directed at humans rather than other cats. Perhaps, with our greater reliance on audio cues and inferior sense of smell, we’re more accustomed to vocal communications and cats recognize this.

Elizabeth Marshall Thomas, best-selling author of books about both cats and dogs has stated that cats may adjust their purrs on an individual basis; you could get your own customized purr.

Multiple studies have found that having a cat around you can lower the risk of cardiovascular disease.

Owning a cat can actually reduce stress and lower one’s risk of various heart diseases, including stroke, by around 30 percent. 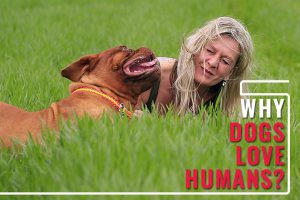 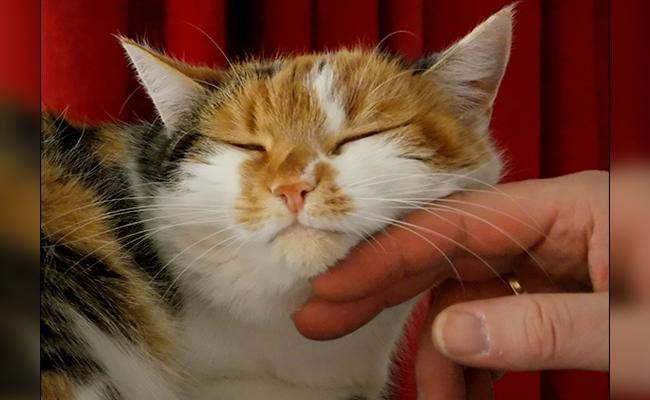 The best way to figure out the hidden message in your cat’s purr is by looking at what else is going on. A kitty curled up on your lap is probably just enjoying your company. However, at dinnertime, your furry friend might have food on the brain.

One thing about which we are quite sure is that purring is not an involuntary reflex; cats purrs deliberately (or on purr pose).

Therefore, when your friendly fluffy fur ball climbs on your lap and starts that magical, mystical rumbling sound, you should feel captivated or honor.