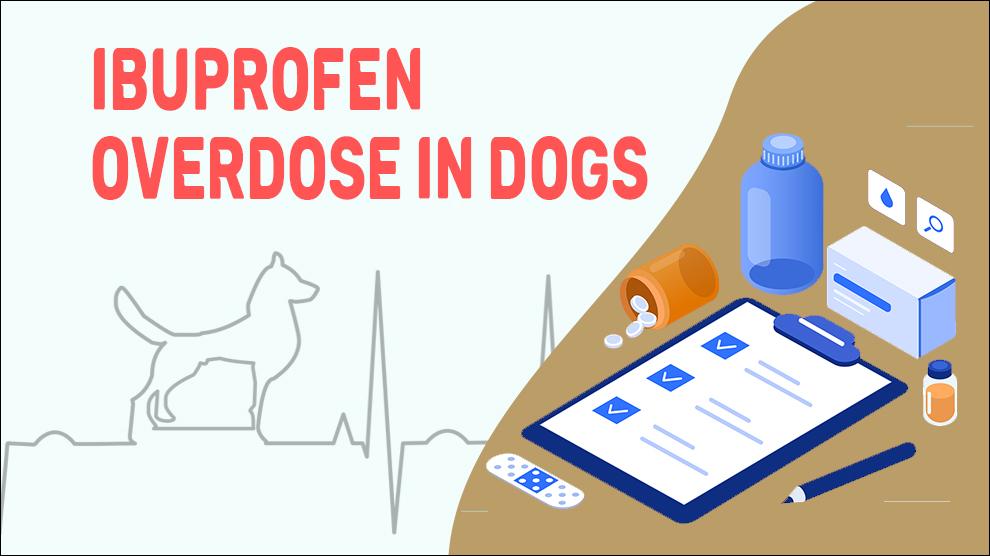 Unfortunately due to its popularity in the medicine cabinets, it can be accidentally ingested by our pets and has a narrow margin of safety for dogs and cats.

Although relatively safe in humans, ibuprofen can easily reach threshold toxic levels in dogs. Signs of toxicosis can appear for as little as 200 mg ingestion happens to a 10-12 kg dog. For Medium-sized dogs (such as 12-18 kg)- 500 mg and for large dogs of size 20-30 kg – 900 mg ingestion is enough to cause GI irritation and ulceration, Larger doses will cause azotemia, renal effects, and results in kidney failure.

The US Animal Poison Control Center had approximately 5000 ibuprofen poisoning cases reported in the last decade, both from accidental ingestion of human medication and overdose of Ibuprofen that was prescribed to dogs.

The most common causes of Ibuprofen poisoning are misuse or off-label use or unintentional usage by the owner (e.g. giving the pet an OTC pain medication used by humans), accidental ingestion from a bottle left open, or a lid chewed off by your dog.

The risk for serious toxicity can be reduced by early treatment and decontamination.

Within a few hours of Ibuprofen ingestion, the veterinarian may provoke vomiting or perform gastric lavage (clearing out the stomach contents).

If you suspect a toxic exposure, act immediately and reach out to clinics nearby.

There are four scenarios that can lead to Ibuprofen poisoning in dogs.

Sometimes, you may follow the prescription recommendations but can result in an overdose. The pet may no longer require an already prescribed dosage dose of medication for some diseases such as diabetes. Prediction is not possible in this case.

Ibuprofen overdose in dogs is fatal and the mortality rate is actually higher. Worldwide data is not available; however, country-wise data itself suggest medicine poisoning causes high fatality in dogs.

Prognosis will depend on the ingested quantity, proper diagnosis, and the timing of treatment. Earlier the diagnosis, recovery is good.

Very severe overdoses in dogs can be treated successfully if they get to the veterinarian right away. Mild cases may cause deaths if the poisoning was not found out until the dog succumbs or the cause is unknown.

Ibuprofen is an over-the-counter oral medication used for pain relief and fever reduction in people. Ibuprofen toxicity can be serious. Yet, pets can survive if the condition is identified, diagnosed, and treated promptly.