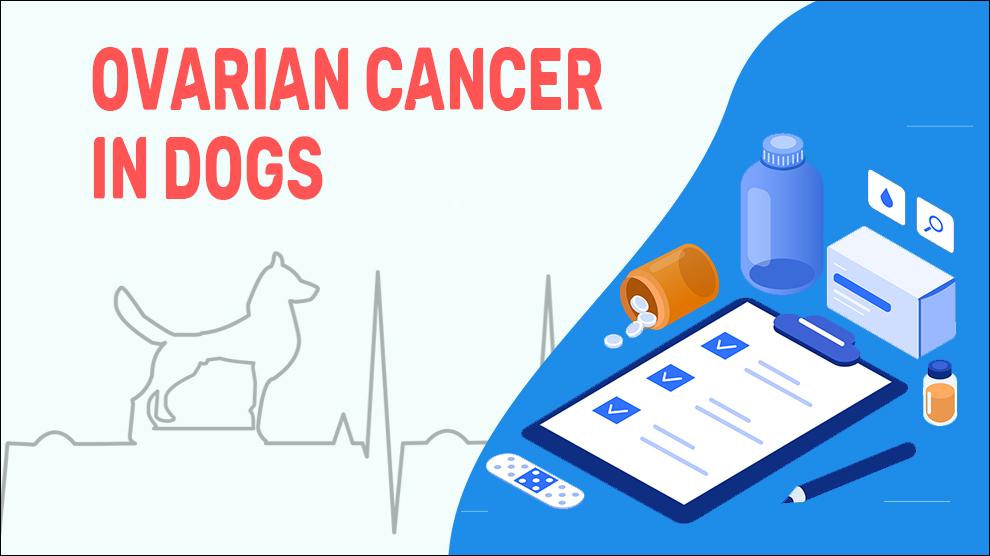 Cancer of the ovaries (ovarian carcinoma) is rare in dogs. Ovarian tumors are malignant growths in the surface cells of ovaries, which are the female sex glands where eggs are formed. The ovarian tumor can be classified depending on its cell origin. They are skin/tissue (epithelial) tumors, sperm and ova (germ) tumors, and sex cord-stromal (SCST) cell tumors. Of all canine ovarian tumors, SCST and epithelial tumors together account for 80-90%.

Ovarian carcinomas are the most common type of ovarian tumor. About 20-30% of cases of Ovarian tumors also spread to nearby organs (metastasizing) and some are capable of producing hormones.

Since ovaries are seedbeds for tumors, it is very important to differentiate between benign and malignant lesions. Benign conditions like ovarian cysts and para ovarian (or para tubal) cysts symptoms are often misdiagnosed to be ovarian cancer. Ovarian cysts which usually develop within the ovary are sacs or packets filled with fluids and are often confused with a neoplastic disease. On the other hand, Para ovarian cysts originate from the genital ridges (mesonephric tubules) and usually dissolve on their own.

Moreover, there have been reports of ovarian metastasis in cases of pancreatic, mammary, intestinal, carcinoma, and lymphoma.

As with any disease, the prognosis is dependent on the extent of the disease, its location, and the treatment chosen.

More importantly, follow the instructions given to you by your veterinarian. Follow up with thoracic and abdominal radiographs once in 2 months if any metastasis is indicated or monitor for recurrence.

Discuss home treatments with your vet to ensure there won’t mess with other medications.

The only way of prevention is by having your pet spayed (removal of ovaries) and this completely prevents the chance of this happening.

Spaying also prevents uterine infections, and accidental pregnancy and decreases the chances of mammary cancer by over 50%.

Epithelial tumor's peak incidence in dogs is between 4 to 12 years.

Germ cell tumors (such as Teratomas) have been reported in dogs between 20 months to 10 years.

Stage I: The least advanced stage of ovarian cancer. Cancer is present in one or both ovaries.

Stage II: Tumor has reached organs close to the ovaries (uterus, fallopian tubes, or both).

Stage III: Cancer has spread to the stomach lining and nearby lymph nodes.

Stage IV: The most advanced stage. Cancer has metastasized to distant organs such as the lungs and liver.

Grade 1: Cancer is well-differentiated. They are less likely to spread or recur.

Grade 3: Looks more unusual. Cancer is poorly differentiated. They are more likely to spread or recur.

The asymptomatic nature, no apparent symptoms during the growth of the tumor or delayed onset of symptoms, and lack of proper screening results in the high mortality rate of ovarian cancer.

When all types of ovarian cancer take together almost 3 in 4 dogs' the survival rate is at least 1 year after diagnosis.

The ratio would be:

Some of the most popular food items include:

For dogs with ovarian cancer, the long-term prognosis is generally poor, regardless of treatment. Dogs can have an improved quality of life for a period of time with proper treatment.