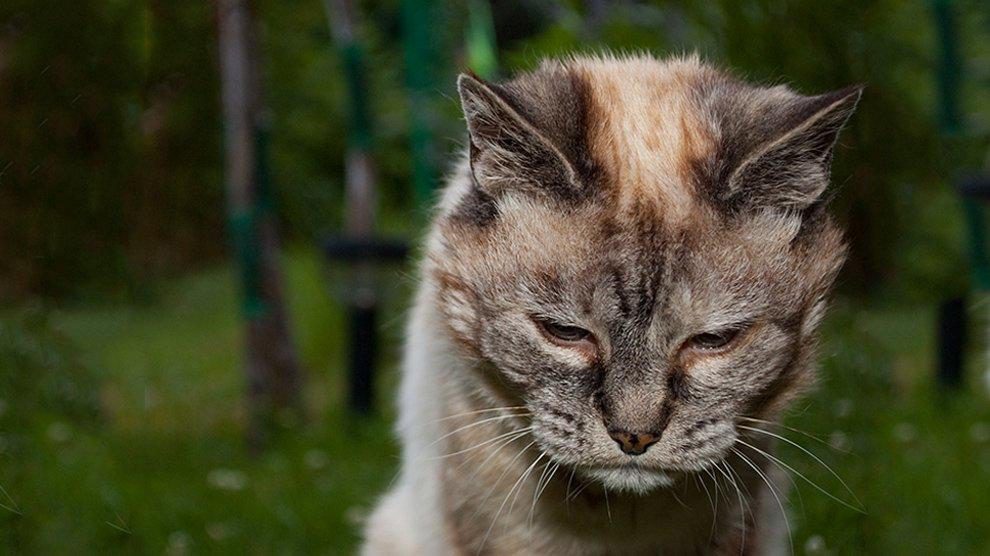 There are a countless number of unknown organisms roaming the earth that still require proper documentation and study.

The occurrence of DS is one that is still being researched to this day, so although researchers don’t have all the answers there are still plans and steps you can take to make sure your cat has the best quality of life.

Cats with FDS also have been making a huge splash on social media and are eliciting a divided response from the public due to questions on their quality of life.

So, let’s dig further and find answers to many questions regarding cats with DS? Can cats really have DS?

Cats With Down Syndrome Video And Infographic 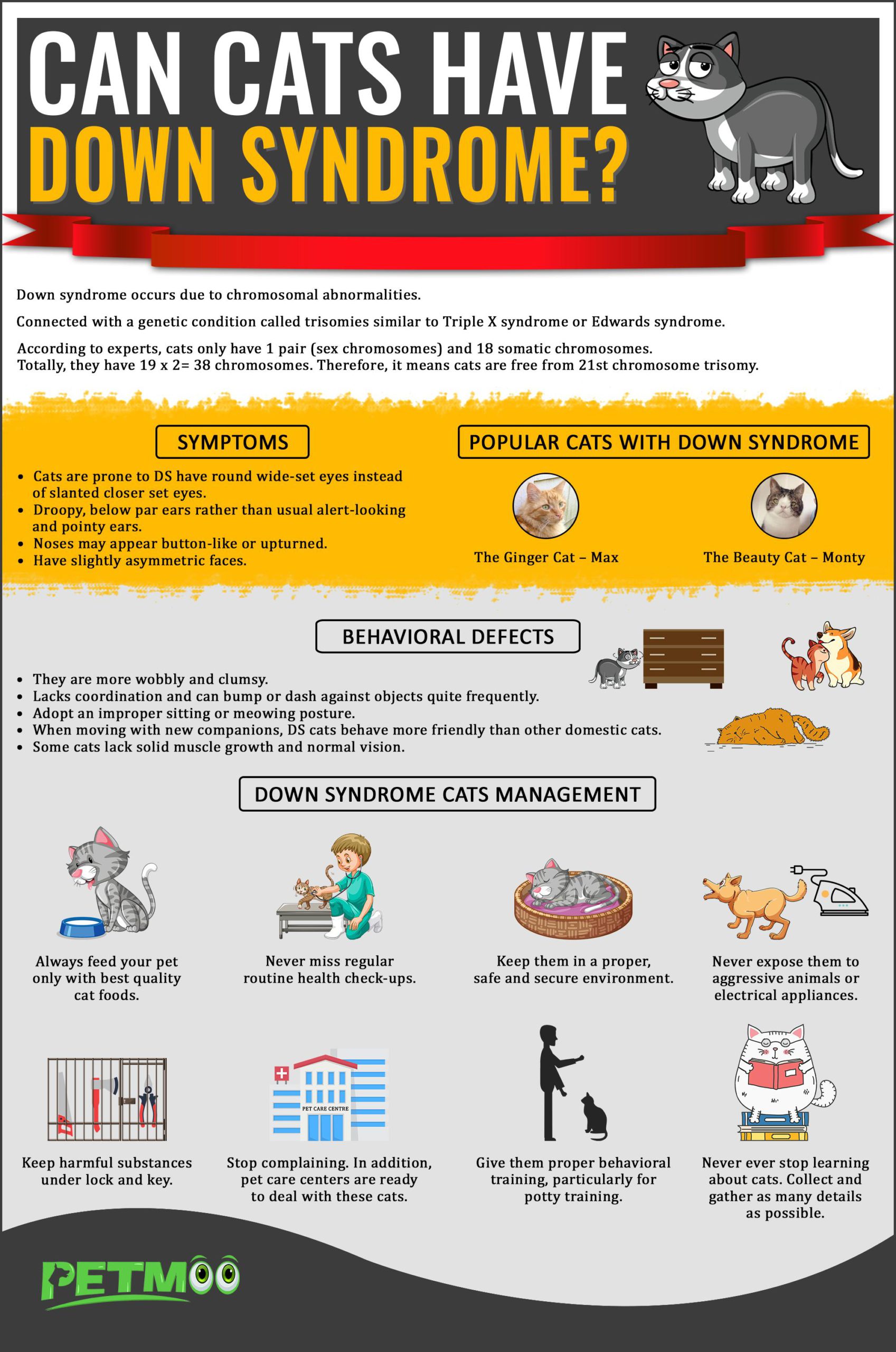 Can Cats Have Down Syndrome? 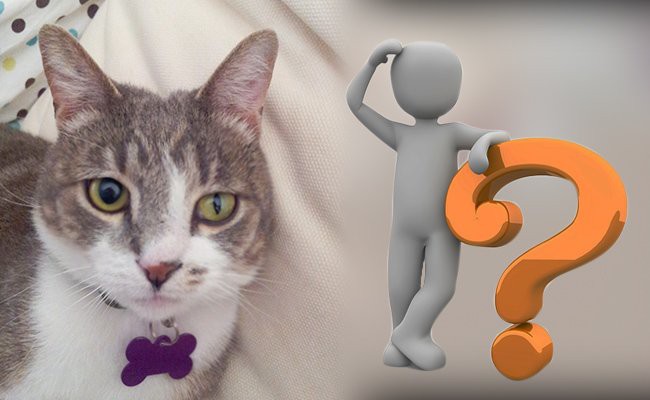 Down syndrome (DS) occurs due to chromosomal abnormalities. This condition is connected with a genetic condition called trisomies which are similar to Triple X syndrome or Edwards syndrome.

According to experts, cats only have 1 pair (sex chromosomes) and 18 somatic chromosomes. In total, they have 38 chromosomes,  meaning cats are free from 21st chromosome trisomy.

Cats with Down syndrome symptoms 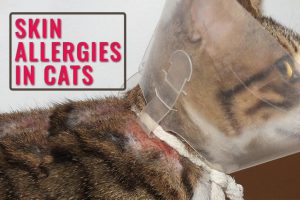 Skin Allergies In Cats Could Be Due To Many Reasons Such As Fleas, Food, Atopy Or Inhaled Allergens. Check Out The Causes And Treatments.
Read More
Back to Index

Popular Cats With Down Syndrome 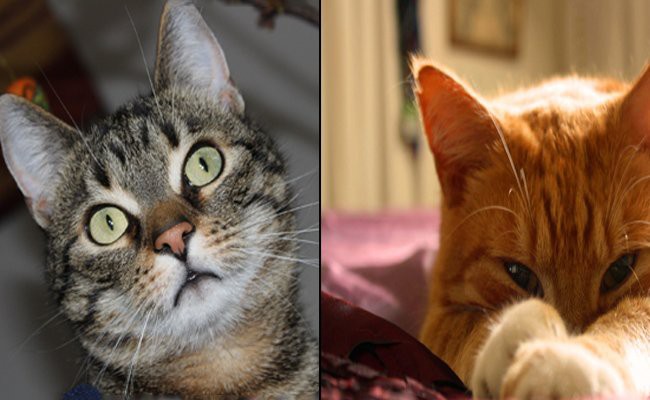 Max and Monty were two cats brought up by different owners but were both diagnosed with something similar to Feline Down syndrome.

When Max, the cute ginger cat turned nine, he was affected by FDS. At times, he walked right into objects such as glass windows. Glen, Max’s owner, was upset over his pet’s condition and pondered over his inability to help Max.

The doctor recommended decreasing additive-enriched food and providing Max with enough vitamins that would boost his development and keep him healthy.

Raised by Danish partners Bjorn and Klein, Monty was quite different from the other pets.

One of the more exasperating differences was that Monty peed in his sleep. In general, older cats may suffer from neuron loss which in turn may damage their ability to hold urine.

Monty is one of the much loved social media felines and has more than 3, 00,000 Facebook followers.

Factors That Determine Down Syndrome In Cats

The basic structure of a human is completely different from that of an animal. Humans have 23 pairs of chromosomes while cats only have 19 chromosome pairs.

Notably, humans with DS have an additional chromosome 21, which is not possible in felines.

2. Behavioral differences do not necessarily translate to having DS

Owners who have cats supposedly affected by Down syndrome complain regularly about lethargy or other, single traits that can cause an owner to worry about their animal’s health and wellbeing.

On the other hand, cats suffering from odd behaviors are not always diagnosed with FDS. Dysfunctional behavior can happen as a result of an ailment or an environmental factor that is forcing your cat to behave oddly.

3. A veterinary investigation will reveal the truth

It’s always safe to check with your vet if your feline is showing a substantial difference in behavior, diet, or sleep patterns. However, cats can be victims of improper diagnosis.

Your vet may or may not have considered the genetic history of the cat. Cat breeds have a variety of different physical features, which can cause genetic blending of traits in your cat.

A cat with an asymmetrical face may not have FDS, but it may be a trait passed down from its mother’s breed.

There is also ‘Klinefelter syndrome,’ something that many cat owners aren’t familiar with. This condition can cause physical changes in your feline.

Vets should be careful in declaring their final diagnosis, making sure to investigate all avenues before providing treatment.

4. Inbreeding can also cause defects

When two animals with a similar genetic makeup mate, their offspring may suffer from defective genes. Correspondingly, the marriage between members of the same family increases the risk of contracting recessive diseases.

The risks of contracting genetic disorders are less than 50% when animals, including humans, mate outside their direct ancestry. 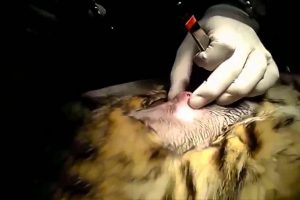 It’s Very Important To Identify The Symptoms And Signs Of Cat Diseases At The Earliest. Find The Medical Ailments & Diseases That Regularly Affect Your Cat.
Read More
Back to Index

Specific Genetic Disorders That Are Similar To Down Syndrome 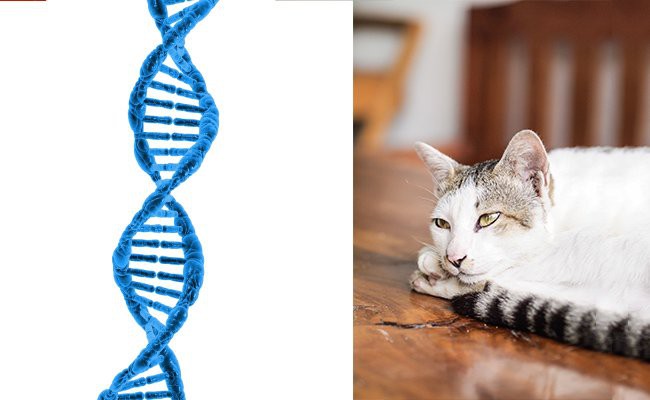 Cats can suffer from a range of ancestral defects that are difficult to detect. A vet would need to examine each of the symptoms of a cat in detail in order to come up with a proper diagnosis.

Below is a list of some of the genetic disorders often wrongly identified as Down syndrome:

One of the lesser-known neurological disorders also called Key-Gaskell syndrome, Feline dysautonomia is largely seen amongst cats. In this disorder, the nervous system of the animal is either parasympathetic or sympathetic.

♦ How does feline dysautonomia works?

The nerve cells in the cat automatically degenerate, causing an autonomic nervous system failure. Britain is believed to be the birthplace of this disorder, due to most of the cases are reported in this country.

A certified vet should be consulted to know more about this disorder.

This condition mostly strikes Birman cats born out of the same family. Researchers have attributed the cause of this disease to be the presence of defective genes. As per medical reports, distal polyneuropathy occurs in cats as young as 2 to 2.5 months.

Most of the time, the owner may mistake this symptom as FDS, as the cat with this disorder may find it difficult to stand and wobbles when standing still.

♦ How does distal polyneuropathy works?

Felines affected with this disorder have insufficient blood levels. These cats are also susceptible to pelvic limb ataxia. Finally, there are no known cures for this disorder and the only option is to perform a DNA test to confirm a diagnosis. Breeders must remain alert before choosing a cat.

Vets have agreed that this syndrome is mostly present amongst cats having a tortoiseshell pattern. In addition, tricolor cats are usually not affected by this disorder.

♦ How does Klinefelter syndrome work?

Another factor of cats with FDS,  other than physical and behavioral irregularities, include cognitive problems. Mother cats that have Feline Parvovirus, also known as FPV,  are at high risk of producing kittens with cerebellar hypoplasia.

♦ How are cats affected by cerebellar hypoplasia?

As the name suggests, this disorder affects feline’s cerebellum. The cerebellum is the section in the brain that deals with maneuvering and coordination, along with fine motor skills.

Cats with cerebellum hypoplasia are described as “drunkards” due to the swaying way that they walk. They have little control over their movement and end up dashing against objects.

Consult a vet or specialist first before attempting administration of medication or Cat owners must avoid administering Feline Parvovirus vaccines.

Without consulting the vet, one should not postpone any major decisions. Another suitable option is spaying your cat.

Simple And Effective Tips To Care For Cats

When you learn that your cat is suffering from a condition like Feline Down Syndrome (FDS), please do not let the diagnosis limit the love and care you give your animal.

If your vet has confirmed that your cat is affected by FDS or any other cognitive disabilities, take a note of these cat care tips:

A New DNA-At-Home Kit Has Been Introduced Only For Cats. Now You Have The New Cat DNA Test Can Explain Your Feline’s Breed Ancestry. Read More.
Read More
Back to Index

Inherited genetic conditions amongst cats can be managed as long as the condition is not complicated.

In an experiment conducted by scientists, there was some success in controlling PKD (polycystic kidney disease) in Persian cats.

The success of this experiment was largely attributed to the presence of just one gene for correction.

Nowadays, many cat breeders send their pets for DNA testing and attempt to prevent cats with errant genes from passing them on and to confirm diagnoses of felines with cognitive disabilities.

Overall, DNA testing helps with the discovery of genetic issues that may cause FDS.

What Is Down Syndrome (DS) In Humans?

DS or Down syndrome is a unique genetic disorder caused by the presence of a full extra chromosome in a 21st pair, which can be referred to as the “Trisomy twenty-one.”

This difference in chromosome number from the normal 23 pairs of chromosomes enables people with DS to have abnormal physical traits, like large tongues, small chins, big outer ears, a short neck, and slanted eyes.

Abnormalities that occur due to DS

Taking all these things into perspective, do you really think cats can have DS?

Technically speaking, cats are free from what humans know as DS but can exhibit other cognitive issues that can present as something similar that comes with the same risk factors.

Only further research can establish the real cause of possible Down Syndrome in cats.

Tips - Cats With Down Syndrome Dirofilariasis Is Actually Heartworm Disease In Cats. This Disease Is Caused By Dirofilaria Immitis, A Roundworm Also Known As The Heartworm.
Read More
Back to Index