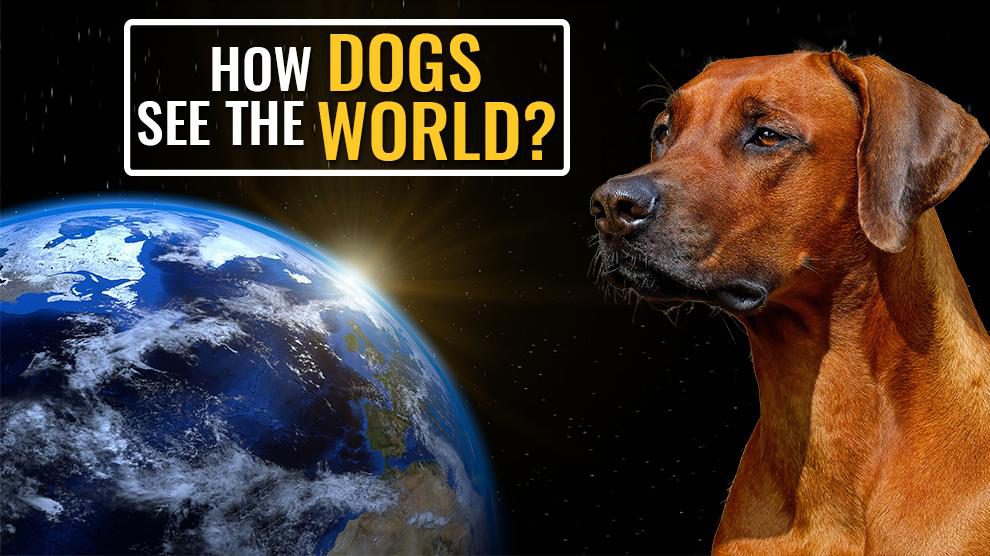 Firstly, dogs can’t see red. Secondly, their eyesight is so awful that they would, perhaps have trouble even seeing the numbers.

Have you ever wondered in the game of fetch, the colorful red ball you’ve just tossed for them to fetch has really vanished into the lush green grass?

Do you know that these colors only appear grey or brownish to your pup? If they can’t see red color mean, how do they fetch them?

Dogs, despite an old misconception, do not see the world only in black-and-white. Their ocular equipment is actually most like people with green-red color blindness.

Colorblind humans differ from dogs in a few other ways also. They have less sensitivity to variations in shades of grey as well as brightness.

But if you start to feel sad for the pooches, don’t forget that your dog has an amazing sense of smell. It lets it ‘see’ the world in different scents.

Most often, they can usually find the red balls using their extraordinary sense of smell. Have you ever noticed your dog looking for toys with his nose instead of his eyes?

Not a lot can go past a dog’s nose. But, what about those poignant eyes? When do dogs start to see? What do dogs see when they ogle a squirrel or stare up at us?

How To Handle A Blind Dog? Video

When Do Dogs Start To See? 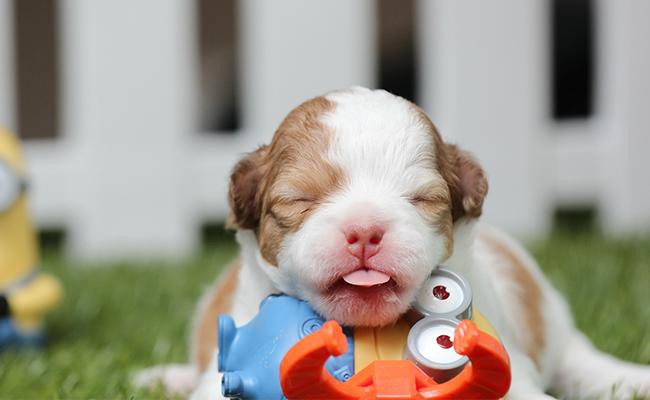 When you look at newborn puppies, you can’t help to feel for them as they appear to be so helpless and incomplete.

At birth, a puppy is blind and his eyes sealed shut for the first 10 to 16 days of life. They start to open their eyes and see around 3 weeks of age.

But, the eyes may not open completely until the dog is closer to 4 weeks old and his vision is not clear yet. His sight will be restricted and incomplete in the beginning as his eyes continue to develop.

Afterward, the puppy has fully developed peripheral vision at about 5 weeks of age. Experts consider that between five and seven weeks of life we can start to train the puppy. It is more independent of the mama and most of its senses are developed by then.

Dr. Stanley Coren, a psychologist specialized in neuropsychology states that dogs can’t read letters and numbers. So, a vet uses field-of-vision tests to find out if your pup can detect any pattern.

Visual Acuity or sharpness of vision is determined by the anatomy of the retina and the optics of the eye. Optically speaking, light focuses correctly on the retinal photoreceptors. That contributes to a sharp image in an emmetropic eye.

Don’t fret about it; dogs don’t depend on vision as humans do. His greatest asset is his nose. 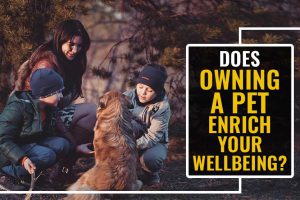 Advantages And Disadvantages Of Having A Pet

Pets Provide Some Sort Of Mental Health Benefits Through Intense Emotional Connection. Check Out The Advantages And Disadvantages Of Having A Pet.
Read More
Back to Index 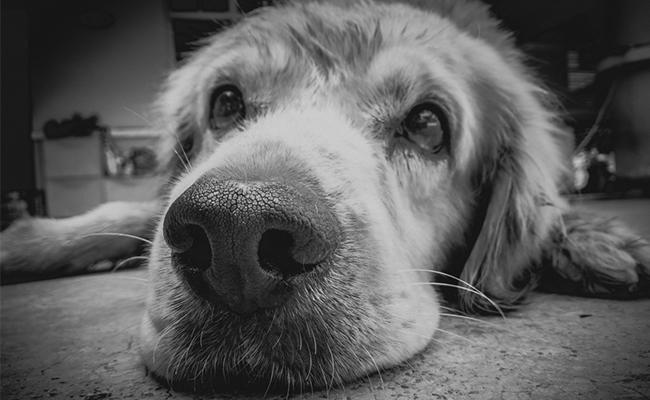 Puppies are, to some extent, color-blind. Dogs see in a dichromatic spectrum of colors. It consists mainly of shades of blue, greyish browns, shades of yellow, etc.

That’s why a red ball in tall green grass may not catch their attention—but a yellow one could!

We, in contrast, see color as a trichromatic spectrum, which is literally all colors of the rainbow. Remember back in elementary science class the abbreviation “VIBGYOR?”

That stood for Violet, indigo, Blue, green, Yellow, Orange and Red, which are all of the colors. So, you see more colors than your pooch and you can also see better in close up.

On top of that, dogs also tend to be nearsighted. Typically, your puppy has a 20/75 vision. But, humans (with correction, if necessary) should have perfect 20/20 vision.

This means a puppy can recognize a pattern only at 6 meters (20 feet) that a human could recognize at 23 meters (75 feet). 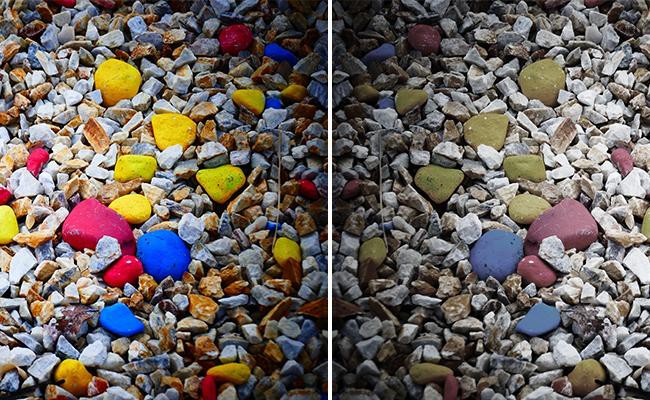 You have definitely been told more than once that dogs see only in black and white. Dogs do not see colors the way we humans do, but the claim that they see black and white is a false myth.

Humans (and dogs) have two types of photoreceptors in the retina: rods and cones. As their name implies, Rods are rod-shaped photoreceptor cells. They are responsible for peripheral and night vision – shades of grey and brightness.

Cones are cone-shaped photoreceptor cells. They deal with color perception and details of objects.

The function of cones is to detect a different wavelength of light. Through these three types of cones, humans distinguish a full spectrum of hues.

Dogs have a higher concentration of rod cells in their eyes. They only have two types of cones (like red-green colorblind humans). This makes their color vision very limited and 6 times less than a human’s visual acuity.

In addition, before you start bragging, keep in mind that humans aren’t at the top of the color-vision chain, either. We might see more colors than dogs do. But, they have more rods than us, meaning that they’re better developed night vision.

Butterflies and Bees have four photoreceptor cones. They can see an incredible spectrum of colors, including UV colors.

The mantis shrimp can detect ten times more color than a human can. It has 16 color-receptive cones and sees more colors than any other creature on the planet. 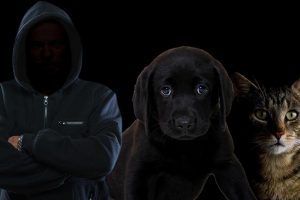 How To Prevent Pet Theft? Most Stolen Dog Breeds

Pet Theft Is A Felony In America. You May Be One Of The Latest Victims Of Pet Theft. Discover Why Pet Theft Actually Takes Place? & Precautions.
Read More
Back to Index

Can Dogs See In The Dark? Do Dogs Have Night Vision?

You must have noticed how your pooches can efficiently maneuver around the house in the dark? We, humans always trip over everything.

Dogs are, in any case, natural predators. So, it makes sense they’ve to seize to some of their evolutionary traits.

But, just how good do they see in the dark? Do dogs have good night vision?

As mentioned earlier, dogs are much better than a human is at detecting movement at lower light. Dogs have a few anatomical adaptations for the night or low-light vision.

Dogs have big pupils, wider retinas having more rod receptors. They have a tissue called the tapetum lucidum lying between the retina and optic nerve. These are the mechanisms by which dogs appear to see in the dark.

We use the term “appear” because dogs cannot see in complete darkness any better than we can. The reason is that they make the best use of whatever light is available to them, no matter how little there is. 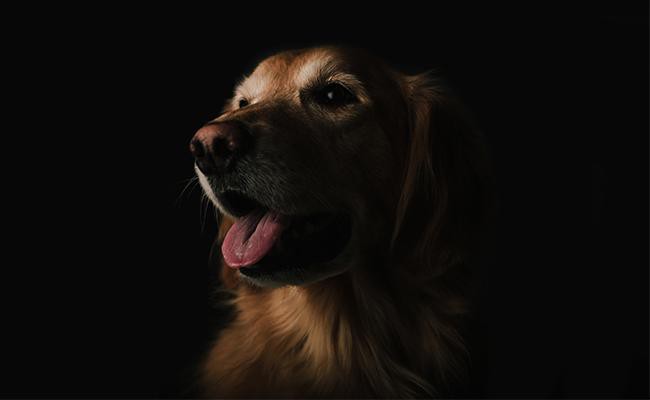 They have a larger pupil that permits more light. The central region of the retina has more rods. They respond better in lower light levels than the color-receptor cones. And the lens is closer to the retina, making the image on the retina brighter.

They also have an extensive binocular field of vision. This allows them to see more of their surroundings as their eyes are set in the front of his face.

While humans see about 180 degrees, dog’s eyes are farther apart on their head, which gives them a 240-degree field of view.

Some of the intelligent guide dogs like Golden Retrievers have a binocular overlap of 75 degrees. Humans have 120 degrees overlap.

A dog’s eye view is also at a significantly lower vista than a human’s. Whether seen from a Great Dane’s perspective or Chihuahua’s pint-size height, the world looks different and much closer to the ground.

Not only helping them see better in dim light, but Rods also help a dog detect small motions faster than humans.

The ability to see better in the dark is by their light reflective cells at the back of their eye ‘tapetum lucidum’. This is a Latin word meaning the “tapestry of light.”

In fact, dogs can see better in the dim light since any available light is used twice, once coming in and again reflected back out.

How Do Dogs See Humans? 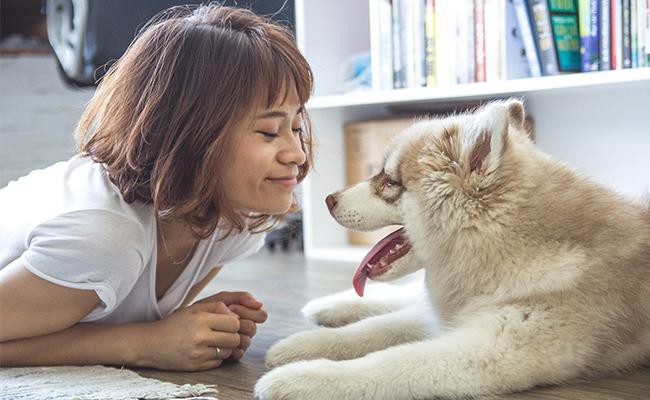 The brain of a dog is hardwired to distinguish human faces. Demonstrating this is not necessarily easy. But, several pieces of research all lead to this conclusion.

Some behavioral tests revealed dogs are so good at identifying human faces. It revealed the presence of supplementary inter-species face recognition cells in their brains.  They are not just cells tuned to canine faces but cells tuned to recognize human faces as well!

Using functional magnetic resonance imaging (fMRI), the dogs are made to see human faces.  They found the increased neural activity alterations in defined regions of the brain. This was easily detected by the scanner.

The most responsive region was the front part of the temporal cortex. This area was relatively insensitive to images of objects, which were not faces.

This region is the “dog face area” (DFA). It corresponds to the same region of the brain that is involved in the recognition of the same species faces in the other animals.

So, dogs are responding to human faces in the same region of the brain where they respond to dog faces.

What’s this study mean to dog owners? Nothing…It is proof of what we already know — your dog does recognize your face and loves you even …you look not so good…