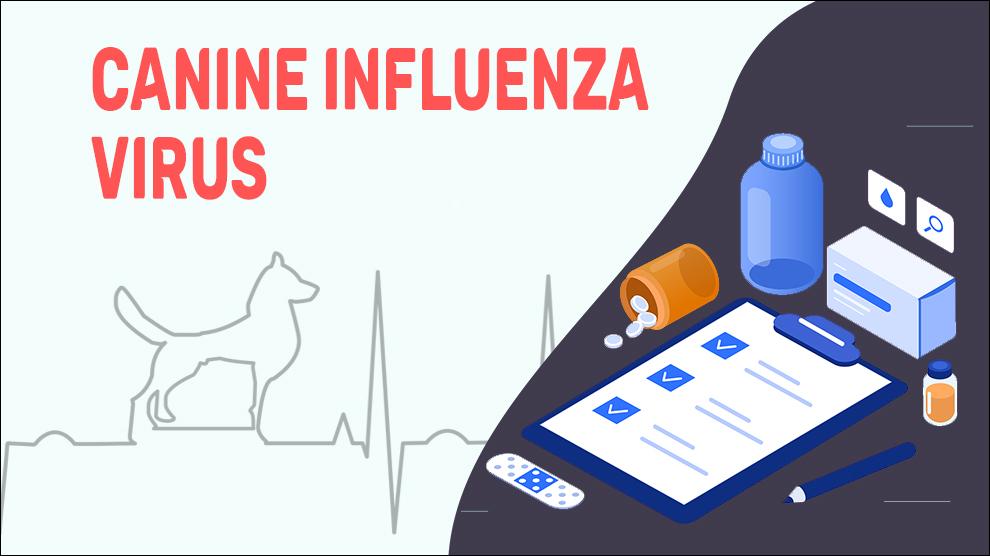 This disease, first diagnosed in greyhounds, has a low mortality rate, as with most other influenza infections (less than 8%) but has high morbidity (close to 100%).

This infection is distinguished from other viruses of the canine infectious respiratory disease (CIRD) group as it is thought to be a mutation from the H3N8 strain(original strain) of the equine influenza virus.

H3N8 strain mortality rate is 1%-5% with the most vulnerable group being dogs that have serious concurrent illnesses. That's certainly nothing to sneeze at. Remember the mortality rate of 1918 Spanish flu is only 2.5%.

There is another strain called H3N2 (avian strain) – which has jumped from birds to dogs. Dogs infected with the H3N2 strain seem to be at greater risk of developing more severe clinical signs however the risk of mortality is low.

Canine influenza can be contracted by being in close contact with other dogs (like in dog parks, boarding kennels, doggy daycares, etc), tactile nose/mouth contact, through contaminated objects (food and water bowls, toys, leashes, and collar) and nasal secretions via airborne droplets (through coughing, sneezing or barking).

Even though there is no evidence that canine flu viruses pass on to humans, influenza viruses can mutate rapidly, and there is a dangerous possibility that at some point in the future, genes that govern infectivity in dogs may mutate and may infect humans.

Just like when you get the flu, your dog also sneeze, have a runny nose, and cough. Canine flu symptoms resemble symptoms of tracheobronchitis ("kennel cough").

While the best prevention is to avoid high-risk locations or contact with an infected animal that is not always possible.

When potential exposure cannot be avoided, proper vaccination can prevent or reduce the symptoms, decrease the duration of the illness and prevent the spread.

There is a vaccine for the H3N8 strain and for the H3N2 strain, and a bivalent vaccine that covers both strains in one shot is also available.

Canine influenza may persist in the environment for a day or two, 12 hrs in hands, 24 hrs on clothing for up to 24 hours. Survival for 24 hrs is possible on surfaces like stainless steel and plastic.

Many disinfectants commonly used in veterinary hospitals and shelters can easily kill the flu virus (aldehydes, phenols, and bleach solutions at a 1 to 30 dilution, potassium peroxymonosulfate, or quaternary ammonium compounds).

The onset of clinical signs after infection for H3N2 is 2 - 3 days, while those infected with H3N8 may start showing signs between 1 - 5 days.

H3N2, H3N8 peak virus shed: 3-5 days post-infection; however, longer shedding times of up to 24 days (H3N2) have been identified in dogs.

Usually, the severity of canine flu is high. Most dogs recover within 3 weeks; still, they can continue to be contagious to other dogs for up to 24 days( H3N2) and 14 days for (H3N8).

Canine influenza virus symptoms can be:

Contact your vet for vaccinating your pets. The most effective way to protect against canine influenza is through vaccination.

These are lifestyle vaccines (non-core vaccines). When you are dogs are expected to mix with large numbers of other dogs such as in kennels, dog parks, etc or if you frequently take your dog outdoors or when traveling to high-risk places, vaccination is recommended.

Dog owners should consult with their veterinarian as soon as they notice the symptoms as some conditions can be very serious (and possibly fatal).

Does my dog need the flu shot?

This depends on your dog’s risk of exposure, lifestyle, and prevalence of the virus in the region. It is always good to check with your vet if vaccination is appropriate for their dog.

Keep informed about outbreaks of infections in your community. So that, if there’s canine influenza or any other kind of infection, you’ll get updates about how to keep your dog and yourself safe until the outbreak passes.