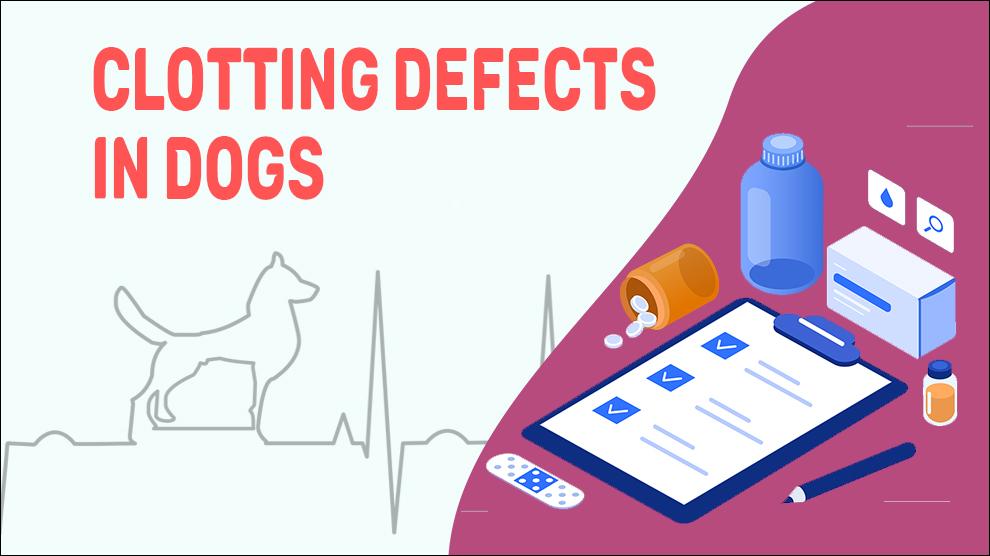 Blood clotting defects are any irregularities that disrupt a dog’s hemostasis, or the body’s process to prevent and stop bleeding.

For successful hemostasis, a complex series of enzyme reactions are involved with appropriate coagulation factors, vasoconstriction factors, and a number of platelets. When there is a failure in one of these processes during an injury, it can cause extended hemorrhaging and ultimately result in blood loss anemia.

Abnormalities in the clotting process (also known as coagulation) disorders may be present at birth (congenital) or acquired due to the result of some other disorder.

Blood clotting disorders can be defined as:

Specific symptoms are exhibited for specific types of clothing and/or bleeding disorders.

Here are some common symptoms:

Symptoms of ‘Hemophilia and Hemorrhage’ include:

Symptoms of ‘Hypercoagulation’ include:

The course of treatment will depend on the type of blood defect.

Blood clotting disorders treatment may include medications or plasma transfusions to help the blood clotting.

For pets experiencing excessive bleeding, blood clotting elements are reintroduced by a plasma transfusion into the dog’s blood.

Vitamin K deficiency - phytonadione injections are given to boost the level of vitamin K.

Dogs with blood loss (transfusion of either red blood cells, or whole blood).

Blood loss from a single site: for e.g. abnormal nosebleed will be stopped by packing with gauze.

Anemic Dogs: Depending on the severity, they may require a cell transfusion whether it's whole blood or pack transfusion of just red blood cells.

Discuss with a veterinarian for any home care specific to your dog’s situation.

Check with your veterinarian for post-surgical checks, usually once a month to ensure the health of the dog and to check for any infection.

Supportive therapies can be done at home and can include topical medications, oral antihistamines, antibiotics, anticlotting medications, and complementary treatments.

Blood clotting disorders due to hereditary abnormality can be prevented by stopping the breeding of affected dogs so that the risk of passing the condition on to the next generation is averted.

Allergy-related: Try to remove or avoid the allergens to prevent future outbreaks.

Food-related disorders such as DVT: Consult with the vet for any specialized hypoallergenic diets.

Hemophilia A: The most common congenital bleeding disorder. This is predominant in Female dogs.

Acquired Clotting Protein Disorders: This is a result of liver disease or liver toxicity.

Canine Thombopathia: This is a congenital defect with defective platelets that are not able to clot appropriately (Basset Hound breed).

Blood Vessel Disorders: This may be inherited or acquired due to other diseases.

Congenital: For instance, Von Willebrand’s Disease is the most common inherited, heterogeneous, bleeding disorder and is found in all breeds.

Acquired Defects: Most commonly associated with kidney or liver disease and infections such as Rocky Mountain spotted fever.

Blood clotting defect incidence is highly common. When the bleeding cannot be stopped or intracranial bleeding or bleeding in other vital organs, this can be fatal.

This depends on the dog’s conditions, but there are two things to consider.

Time to visit the vet clinic for an examination, if you notice any of the following:

Treatment and subsequent prognosis will vary according to the specific clotting defect of the dog.

Within a few days of starting the proper treatment, most of the acquired blood clotting defects symptoms will be relieved. The clinical signs acquired due to underlying conditions can be controlled by appropriate treatment.