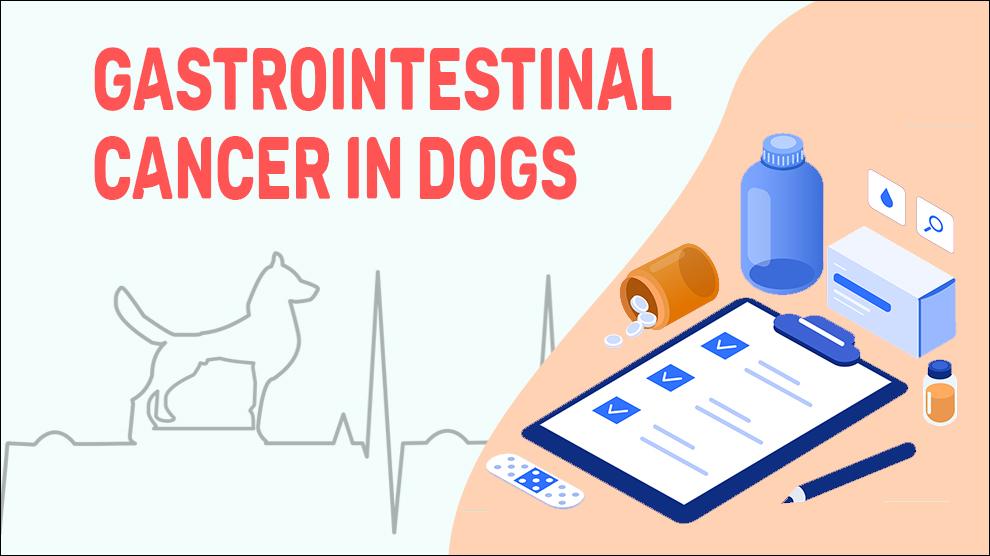 What Is Gastrointestinal Cancer In Dogs?

GI tumors may be either malignant (cancerous) or benign (non-cancerous). Malignant tumors Of the GI tract are aggressive, invasive, and prone to metastasize.

Canine lymphoma (CL) is the most common gastrointestinal malignancy in dogs. They are malignant, diverse, monoclonal, neoplasms of lymphocytes in dogs especially the lymphoid cells of either B or T-cell immunophenotype. Lymphoma represents 5 - 25% of all tumors and 80 - 90% of hematological cancers.

Lymphoma (more properly called lymphosarcoma) is one of the top five causes of cancer-related deaths in dogs. Middle-aged to old dogs are most affected and the estimated incidence rate is 60 - 100 cases per 100,000 dogs.

The second most common gastrointestinal malignancy is ‘pancreatic adenocarcinoma.’ In spite of its low occurrence when compared to other more common malignancies (lung, colorectal, esophagus, prostate, etc), pancreatic cancer is one of the leading causes of death in dogs.

Colon and rectal cancers are usually grouped under ‘colorectal cancer’ as they both have many features in common. Proximal colon cancer and colorectal tumors are the most common tumors of the large intestine.

Symptoms Of Gastrointestinal Cancer In Dogs

Symptoms are dependent on the type of GI cancer.

Prevention Of Gastrointestinal Cancer In Dogs

Prevention is not possible for GI cancer as the causes in dogs is varied. Treatment and survival rates vary depending on the grade and stage of cancer.

Good overall health and early detection are the only ways to prevent GI cancer.

Check your dog on a regular basis and consult your veterinarian immediately if you find any odd lumps or lesions.

Causes vary based on the cancer type.

There are many variations and subtypes of GI cancer as the GI tract includes many vital organs.

For instance, types of colon cancer.

Primary Colon Cancer: Cancer that originates in the colorectal region itself is called primary prostate cancer. Most primary colon cancers are destructive and with high metastatic potential. For example, colorectal Adenocarcinomas (95 %).

Secondary Colon Cancer: Cancer that spreads from another organ or metastasized to the colorectal region.

The mortality rate of benign types of intestinal cancer is almost zero. Adenocarcinoma type of cancer is highly aggressive and it should be diagnosed early as well as treated promptly. Sadly less than 50% of dogs live more than 10 - 12 months from the time of diagnosis of malignant intestinal tumors.

The mortality rate depends on the type and severity of gastrointestinal cancer.

Adenocarcinoma and lymphoma of the GI tract are highly aggressive and they should be diagnosed early as well as treated promptly. If it is not discovered in the early stages, then the mortality rate will be higher.

Prognosis can differ based on the time of diagnosis and aggressiveness of the GI tumor. Generally, when the cancer is detected early, before any metastasis, radiation and chemotherapy treatment may be effective. When there is the presence of significant metastasis, vets may recommend against conventional treatment and will treat your dog’s clinical signs to make them comfortable.

When To See A Vet For Gastrointestinal Cancer In Dogs?

The most favorable prognosis can be expected with early detection and appropriate treatment. This emphasizes the significance of a stomach examination as part of a routine physical examination in all dogs.

For benign tumors, recovery is very good. Proper post-operative care should be provided for 3 months to monitor tumor regression. Malignant intestinal tumor recovery is poor. Many dogs can die within a year from diagnosis or are sometimes euthanized.