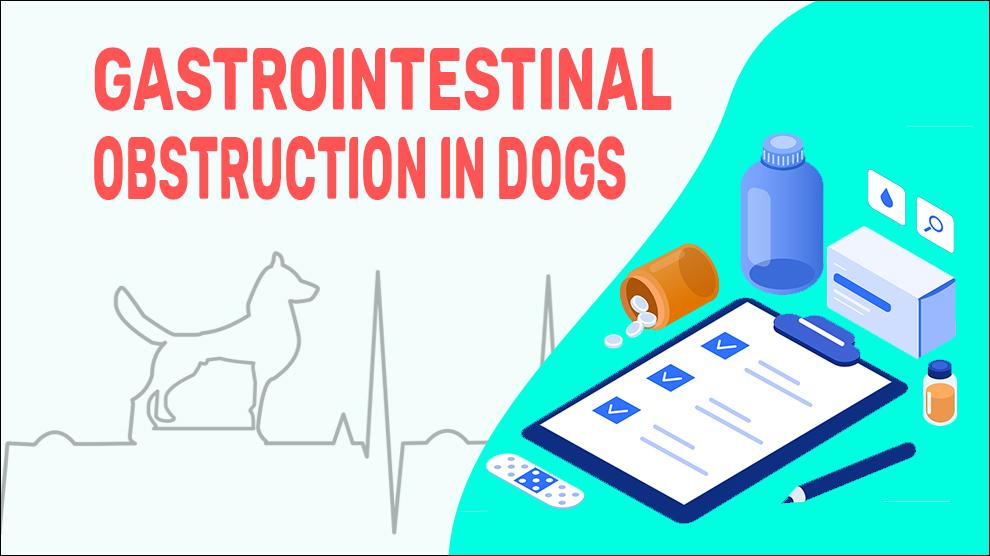 Gastrointestinal obstruction is a multifactorial condition that includes a spectrum of disorders/ diseases resulting in partial or complete blockage of the bowel that may also disturb enteric neuromuscular coordination.

The main cause of stomach/bowel obstruction is when a pet eats a non-food foreign object and it cannot pass through the gastrointestinal (GI) tract. Foreign objects can be non-digestible things (toys, socks, pantyhose, string) or slowly digested foods (bones). These items can become lodged inside the stomach, intestinal tract, esophagus, or under the tongue. Sometimes, foreign bodies can get lodged or stuck in several locations in the GI tract if they are composed of linear things such as fabric, carpet, or strings.

Gastrointestinal cancers could be another reason for GI obstruction. This can happen anywhere between the gastrointestinal tract i.e. stomach, esophagus, pancreas, biliary system, small intestine, large intestine, anus, and rectum. GI tumors may be either malignant (cancerous) or benign (non-cancerous). Malignant tumors Of the GI tract are aggressive, invasive, and prone to metastasize.

Meanwhile, Colonic pseudo-obstruction involves chronic inflammation of a dog's gastrointestinal tract distinguished by the presence of inflammatory cells (chronic enteropathies) which cannot be associated with other possible health conditions.

Gastrointestinal dysmotility can also be a reason for GI obstruction. This may be either primary (myopathic or neuropathic, that may be sporadic or hereditary) or secondary to drugs and a number of systemic illnesses.

Symptoms of GI obstruction depend on the cause

GI obstruction due to foreign bodies

GI obstruction due to tumor

This in turn depends on the type of GI tumor

Endoscopy: Most of the foreign objects in the stomach can be removable with an endoscope. A long fiber-optic tube is inserted through the mouth, potentially allowing the vet to grasp the object and pulled through the grabbing instrument in the endoscope.

If the foreign material is lodged in the intestine, Endoscopy cannot be an appropriate treatment choice and only abdominal surgery can get rid of it. A small surgical opening is made in the stomach or intestine and the foreign material, as well as a damaged section of the GI tract, are removed.

Most of the obstructions due to GI cancers getting completely cured is really uncommon, but treatment can make your dog feel better with the least side effects. This is called disease remission as the cancer burden would be reduced by at least 50% and undetectable to any readily available screening test.

Surgical options, radiation, chemotherapy, or a combination of these modalities may be tried. Chemotherapy protocols vary depending on the type of cancer.

There is no breed restriction.

Causes vary based on the type of GI obstruction

Some breeds are predisposed to GI obstruction due to congenital anomalies in the GI tract.

This is generally caused due to a neuromuscular disease such as myasthenia gravis, inflammation of the GI tract, tumor, parasitic infections, a foreign body in the GI tract, or some form of toxicity.

A dog with complete gastrointestinal blockage or stomach obstruction could die within 3 - 5 days when rapid medical intervention is not provided. The mortality rate of benign types of intestinal obstruction is almost zero. Adenocarcinoma and lymphoma of the GI tract are highly aggressive and they should be diagnosed early as well as treated promptly. If it is not discovered in the early stages, then the mortality rate will be higher.

In most cases, Non-malignant Gastrointestinal obstructions are manageable with appropriate treatment. Complete recovery is possible and it is typically able to continue with daily activities. For the malignant gastrointestinal obstruction, the prognosis can differ based on the time of diagnosis and aggressiveness. Generally, when the obstruction due to cancer is detected early, before any metastasis, radiation and chemotherapy treatment may be effective. When there is the presence of significant metastasis, vets may recommend against conventional treatment and will treat your dog’s clinical signs to make them comfortable.

The best way to avoid ingestion of gastric foreign bodies is to control access to swallowable objects. Permit your dog to only chew on toys that are non- swallowable.

The most favorable prognosis can be expected with early detection and appropriate treatment. This emphasizes the significance of a stomach examination as part of a routine physical examination in all dogs.