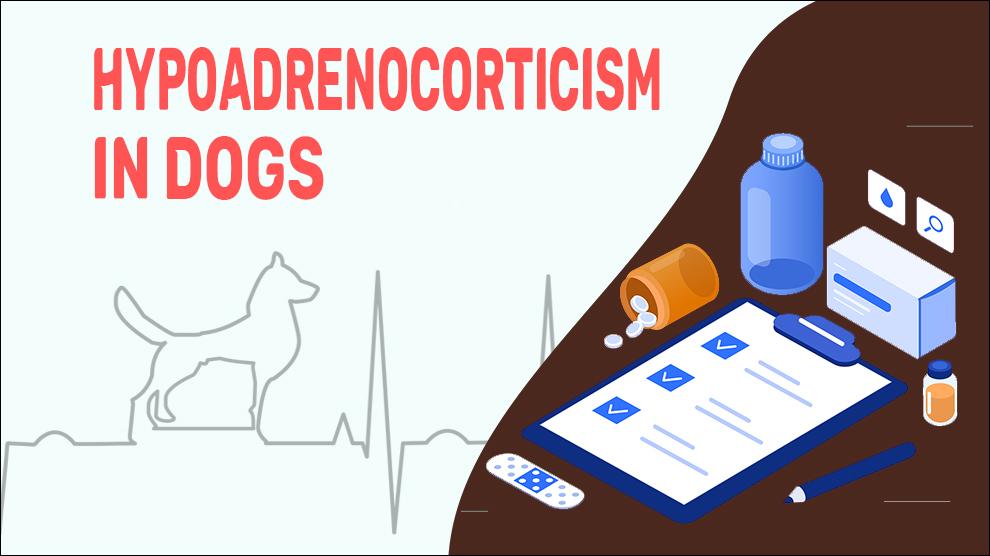 Hypoadrenocorticism is an autoimmune disorder resulting in decreased production of adrenocortical hormones such as glucocorticoid (cortisol) and mineralocorticoid (aldosterone) production or both from the outer part or cortex of the adrenal gland.

Also called Addison's disease, this is mostly found in young to middle-aged dogs and in female dogs. The incidence of hypoadrenocorticism is an uncommon illness, with estimates of its ranging < 0.5%. Hypoadrenocorticism clinical signs occur when at least 90% of the adrenocortical tissue is damaged, leading to deficiencies of glucocorticoids and mineralocorticoids.

Primary adrenocortical failure happens from the destruction or atrophy of all 3 adrenal cortical layers, which results in insufficient secretion of adrenocortical hormones. There is no report of Spontaneous recovery.

Canine hypoadrenocorticism is often referred to as the great imitator as it presents with nondescript signs and is rarely pathognomonic. Although it is uncommon in dogs, pet owners should consider the diagnosis with the proper signalment and clinical signs.

The cause of primary adrenocortical failure is mostly an autoimmune response. Other causes include hemorrhage, infarction, destruction of the adrenal gland by granulomatous disease, metastatic tumor, agents (mitotane), or adrenal enzyme inhibitors (trilostane).

1. In veterinary medicine, this is said to be "the great imitator".

2. The conventional Addisonian dog’s complete adrenal cortex is lost; on the other hand, the atypical case affects only sections of the zones and spares the glomerulosa layer, resulting in varied clinical presentations.

3. Glucocorticoid deficient-only hypoadrenocorticism is the most prevalent atypical form.

Hypoadrenocorticism is a disorder with serious sequela. Meanwhile, Hyperadrenocorticism goes ignored until it becomes a medical emergency. Manifestation of symptoms is abrupt and can be extremely severe. This is called adrenocortical insufficiency ("Addisonian crisis"). This acute adrenocortical emergency includes critical symptoms such as shock and bradycardia. For Addisonian symptoms, there is no other choice other than immediate veterinary care.

If Left untreated, Hypoadrenocorticism is often life-threatening, but luckily, dogs with Addison's disease can have a relatively normal life expectancy with proper treatment and disease management.

For a condition like hypoadrenocorticism, your dog’s yearly veterinary check-up should not be missed.

Even for the dogs that are well regulated, evaluate them at least twice yearly, with a physical examination and routine bloodwork.