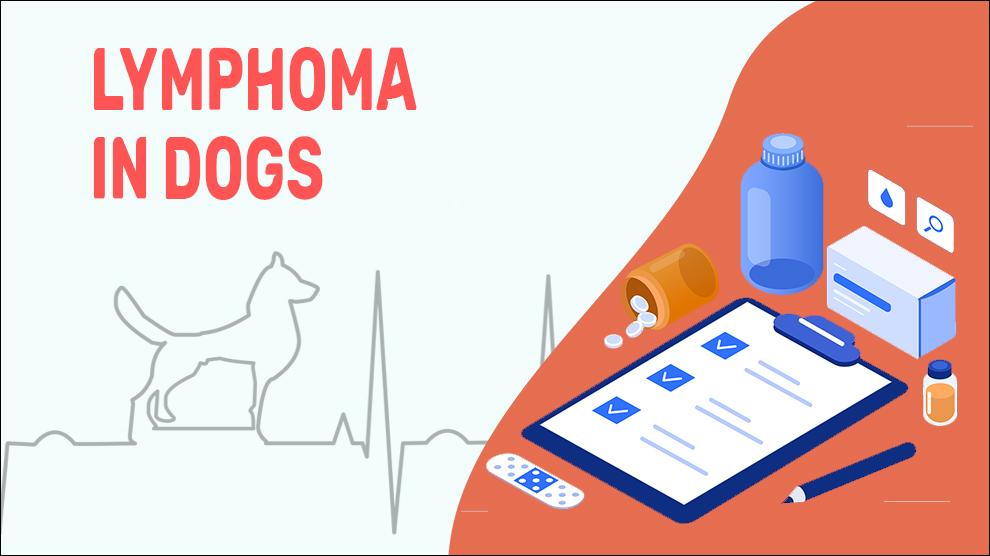 What Is Lymphoma In Dogs?

Canine Lymphoma (CL) is a malignant, diverse, monoclonal, neoplasm of lymphocytes in dogs especially the lymphoid cells of either B- or T-cell immunophenotype. Lymphoma represents 5-25% of all tumors and 80-90% of hematological cancers.

Lymphoma (more properly called lymphosarcoma) is one of the top five causes of cancer-related deaths in dogs. Middle-aged to old dogs are most affected and the estimated incidence rate is 60-100 cases per 100,000 dogs.

In many aspects comparable to non-Hodgkin lymphoma in humans, canine Lymphoma is not a single disease as there are over 30 described types with a wide variation in histological subtypes, and clinical presentations are recognized.

Although the exact cause is unidentified, genetic susceptibility and environmental factors are considered to play an important role.

Let’s begin with the most basic type of lymphoma– whether the tumor crops up from T cells or B cells. Lymphocytes are an important part of the immune system that fights infection. They are produced by the lymphoid tissue in the bowel and lymphoid stem cells in the bone marrow. Most lymphocytes are either B cells (which produce antibodies) or T cells (2 types- T cells that provide signals and other types produce cytokines which attack foreign cells).

Lymphoma can arise when either B cells or T cells start to divide uncontrollably.

Owing to its similarity to the human non-Hodgkin’s lymphomas, canine lymphoma is one of the well-researched and best understood (hopefully) cancers in dogs, as well as the same chemotherapy protocols, are used to treat both.

Symptoms Of Lymphoma In Dogs

Treatment Options For Lymphoma In Dogs

Survival rate and prognosis are dependent on the grade and stage of cancer, and how promptly treatment is given.

Lymphoma getting completely cured is relay uncommon, but treatment can make your dog feel better with the least side effects. This is called disease remission as the cancer burden would be reduced by at least 50% and undetectable to any readily available screening test.

By itself, the antitumor dosage of prednisone increases average survival times to 1 to 3 months, but it is not beneficial in all cases. Sometimes, it makes subsequent chemotherapy treatment less successful.

CHOP protocol: Four antineoplastic agents are used in this treatment and they are simply called CHOP:

Other lymphoma protocols include a protocol consisting of single-agent doxorubicin administered every 3 wk or a non-doxorubicin-based combination protocol (COP).

Home Remedies For Lymphoma In Dogs

Lymphoma cannot be completely cured even with medical management. Discuss home treatments with your vet to ensure there won’t mess with other medications.

How To Prevent Lymphoma In Dogs?

Prevention is not possible for canine lymphoma as the causes in dogs is varied. Treatment and survival rates vary depending on the grade and stage of cancer.

Good overall health and early detection are the only ways to prevent lymphoma.

Check your dog on a regular basis and consult your veterinarian immediately if you find any odd lumps or lesions.

Breeds that have decreased risk of canine lymphoma: Dachshunds and Pomeranians.

Causes And Types For Lymphoma In Dogs

There are many different subtypes of Lymphoma, each with its own unique features, varying in severity and prognosis. The most common ones are

The extra-nodal disease is rare when compared to Primary nodal involvement; however, any organ may be affected.

Both of them may originate in the lymphocytes, but lymphoma affects lymph nodes and other tissues, rather than blood and bone marrow as in the case of lymphocytic leukemia. Although Leukemia in dogs is quite rare, every now and then dogs are diagnosed with both lymphoma and leukemia.

Technically speaking, Lymphoma is leukemic lymphoma at Stage V- that means the cancer is both in the blood or bone marrow and in organ tissues.

Leukemia is a liquid kind of cancer seen in the bloodstream – it flows around with the blood. Lymphomas, on the other hand, are solid tumors usually causing enlarged lymph nodes or solid masses.

Another similar-sounding cancer is lymphangiosarcoma, which is a rare type that begins in the lymphatic endothelial cells causing lymphadenomegaly/ lymphadenopathy, lymphadenitis, and abnormal enlargement of the lymph glands/ abnormally shaped or textured lymph nodes.

A substage is further added to distinguish the clinical presentation of the dog.

The suffix ‘a’ indicates the absence of systemic signs.

‘b’ indicates the presence of systemic signs such as weight loss, hypercalcemia, fever, etc.

Usually, the life expectancy in dogs without treatment is 1-2 months. With chemotherapy protocols, this can be increased to 12 months for about 80% – 90% of dogs.

Lymphoma’s activity is complicated and depends on many factors. In general, the cancer is staged from I-V; stage I is less destructive than stage V Lymphomas.

Unfortunately, most lymphomas are rapidly progressive and high-grade. Initially, there will be enlarged lymph nodes and no clinical signs of illness, If left untreated, most dogs reach terminal stages 1-2 months from the presentation.

When To See A Vet For Lymphoma In Dogs?

Food Suggestions For Lymphoma In Dogs

The ratio would be:

As with any cancer, proper and earlier diagnosis, as well as aggressive treatments, gives more successful outcomes.

Dogs with lymphoma often survive for 1-2 months without chemotherapy, but with treatment, the prognosis is even better. Dogs can have an improved quality of life for a period of time with proper treatment.