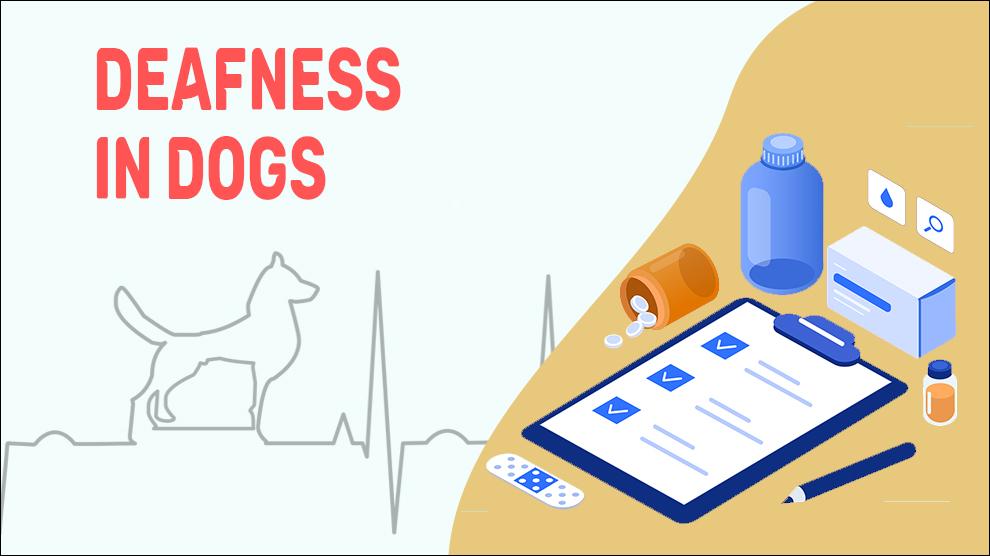 Deafness or hearing loss or Hearing impairment refers to the complete or partial, permanent or temporary inability to hear sounds.

Just like humans, dogs can suffer hearing loss as they age. Usually, geriatric deafness may be difficult to notice as it is a gradual process and eardrums flexibility decreases with age. Some dogs are not aware of the loss of hearing. Generally, high-pitched noises are hard to distinguish and the ability to perceive low-pitched noises is not affected.

Hearing loss is more complicated than it seems - although it can be one of many symptoms that surface out caused by an underlying condition, there is also a possibility that it may an independent condition manifested.

In any case, you should be careful about these symptoms of deafness in your dog:

Your vet may recommend diagnostic tests depending on your dog’s health, current symptoms, and medical history.

Depending on the underlying cause, vets may recommend one or a combination of these treatments:

Discuss with a veterinarian any home care specific to your dog’s situation.

This may include dietary changes, alternative therapies, further medications to administer, and future veterinary visits for treatments as needed.

There is no way to prevent hearing loss or any other hearing disorder. Inculcating a healthy routine from the start is a good way of prevention.

Currently, DNA testing to find out those genes that are responsible (piebald, merle genes) for the cause of deafness is not available.

BAER testing (Brainstem Auditory Evoked Response): Also called auditory brainstem evoked response (ABR), this testing is usually performed in a referral setting whereas behavioral testing is generally performed in the clinical setting. Reaction to tone bursts or clicks in the ear is measured with the timing of the electrical waves from the brainstem. The responses produced by an audible stimulus outside the animal’s visual field are observed and analyzed.

2. Types of Deafness in dogs:

Acquired deafness is of two types:

Deafness is not usually associated with mortality, however, hearing loss can lead to Behavior problems, which in turn decrease their health as well as their quality of life and may lead to euthanasia or relinquishment.

Prognosis depends on the diagnosis and appropriate treatment/ behavior/environmental modification.

The prognosis for dogs with hearing loss depends upon the specific diagnosis, as well as the dog's health condition at the time of diagnosis.

If the underlying cause of hearing loss is diagnosed early and the dog is in relatively good health, effective treatment for the underlying illness will result in a good prognosis.

Sadly, certain hearing loss causes that indicate your dog is suffering from a very serious or life-threatening condition (such as cancer, toxins, or severe trauma) have a less favorable prognosis but still, it is manageable