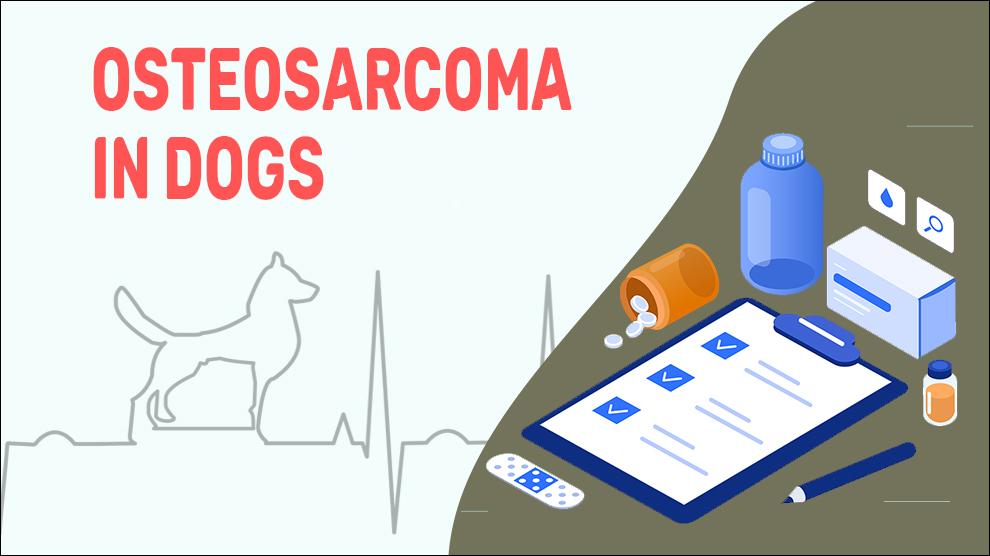 Canine osteosarcoma (OSs) is malignant and highly cellular; infiltrating neoplasms in dogs especially develop from the uncontrolled proliferation in the cells that produce and break down bones (called osteoblasts and osteoclasts respectively).

Also called as also called osteogenic sarcoma (OGS), osteosarcomas are rare in dogs accounting for 15/100,000. Osteosarcomas most commonly develop in the long bones (legs and arms), though bones such as the hips, pelvis, or jaws may also be affected. Osteosarcomas affecting non-bony tissues are called extraskeletal osteosarcomas, such as the liver, spleen, kidneys, and mammary glands. Most OSs are both locally invasive and have a high likelihood to metastasize to other organs.

The most prevalent histological subtype of canine primary bone tumors both in humans and dogs is Osteosarcoma. This accounts for almost 90% of primary bone tumors. More often than not, OS is diagnosed in middle-aged to older dogs, with a median age of 8 years.

Osteosarcoma tumors are hard to categorize and it is highly heterogeneous in their manifestation. There are several subtypes according to the location within the bone, histological variation, and degree of differentiation. This malignant osseous neoplasm typically affects large and giant breed dogs; however, body size alone cannot expound the difference in incidence between different breeds of dogs. The occurrence seems to vary comprehensively between certain breeds of similar body sizes.

The osteosarcoma symptoms vary depending on the location.

During diagnosis, most of the dogs will have microscopic clusters of tumor cells that already have spread to distant regions even though they were undetected by conventional tumor staging procedures (micrometastasis). Therefore, staging is always suggested in osteosarcoma treatment.

Surgical options such as amputation, radiation, chemotherapy, or a combination of these modalities may be tried.

By itself, the antitumor dosage of prednisone increases average survival times to 1 to 3 months, but it is not beneficial in all cases. Sometimes, it makes subsequent chemotherapy treatment less successful.

Radiotherapy: This may be used to shrink cancerous cells prior to surgery or used post-op to reduce the duration of the resulting remission.

Viscum album extracts are used in the homeopathic treatment of osteosarcoma.

Prevention is not possible for canine osteosarcoma as the causes in dogs is unidentified.

Examine your pets once a month and consult your veterinarian immediately if you find any Painful, swollen lumps on long bones, Limping, or appearing weak or distended abdomen.

Primary Osteosarcoma: They originate in the long bones and spread to another part of the body. Primary OS has a propensity to metastasize to lymph nodes, liver, and spleen.

Secondary Osteosarcoma: That arises from a different organ or tissue and metastasizes to the bones.

Bone OS can be classified as:

Osteosarcoma activity is complicated and depends on many factors. In general, the cancer is staged from 1 - 3; stage 1 is less destructive than stage 3 OS.

Most of the OS is rapidly progressive and high-grade. Initially, there will be enlarged lymph nodes and no clinical signs of illness, if left untreated, most dogs reach terminal stages 1 - 2 months from the presentation.

While the exact cause is unidentified, genetic susceptibility and environmental factors are considered to play an important role. Unfortunately, the osteosarcoma prognosis is considered to be poor. Regardless of aggressive oncological and surgical intervention, over 75% of tumors relapse within the first year.