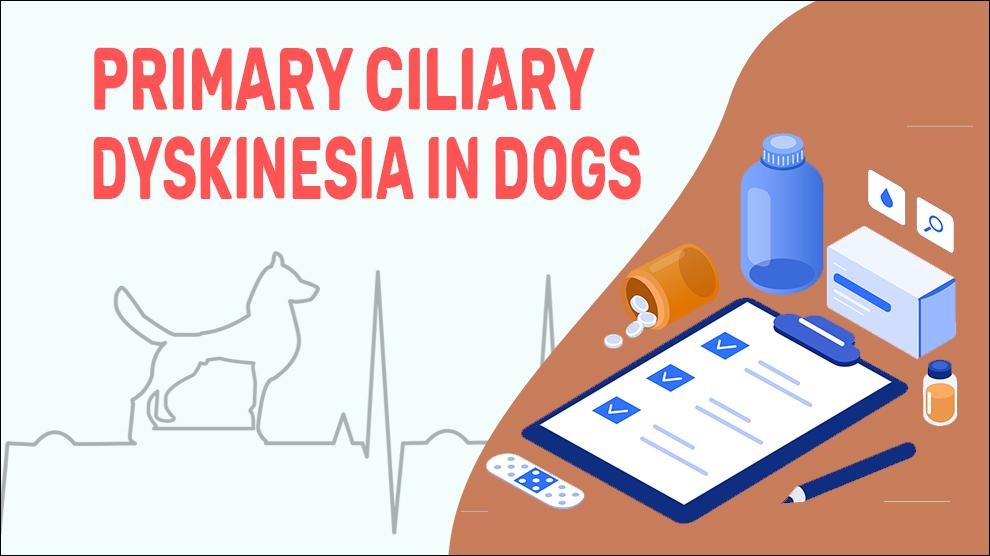 Primary ciliary dyskinesia (PCD) is usually a heterogeneous, hereditary condition in which cilia – microscopic hairlike organelles (similar to flagella) in the respiratory system are either absent or there are abnormalities in ciliary structure and motility.

Ciliary dysfunction affects mucociliary function and prevents the removal of mucous in the lungs, middle ears, and paranasal sinuses. This can result in a range of respiratory complications that includes recurrent infections of the upper and lower respiratory tract.

Also called immotile cilia syndrome and Dyskinetic cilia syndrome, this may also cause a PCD associated laterality defects such as the heart and other internal organs are positioned mirror-image from their usual positions (situs inversus). This occurs in approximately 50% of dogs with PCD.

When the Ciliary dysfunction is accompanied by the triad of chronic sinusitis, bronchiectasis (dilation of the airways of lungs), and situs inversus, the condition is called Kartagener’s syndrome.

There are no ways to prevent or reverse PCD now.

There are no home remedies as this is basically an inherited disease. The only way of prevention is by eliminating affected dogs from the gene pool.

When dogs are diagnosed with inherited types of PCD, it is important to take measures to avoid breeding or neutering the dogs (if they does survive to adulthood) to remove affected dogs from the gene pool.

Primary ciliary dyskinesia: This typically affects puppies of < 8 weeks of age. However, it has been documented to affect older dogs too and that is rare.

Secondary ciliary dyskinesia: Cliotoxic agents cause acquired and reversible morphological modifications to the microtubules that hamper functions of the cilia or ciliary orientation. Examples of ciliotoxic agents are anesthetics, antihistamines, propranolol, lipophilic and mercuric preservatives, etc.

PCD is also associated with Situs ambiguous (or heterotaxy), a condition characterized by the abnormal arrangement of abdominal or thoracic organs between situs solitus and situs inversus. Digital clubbing is characterized by focal enlargement of the terminal phalanges of fingers and/or toes due to increased connective tissue around the nails, most markedly on their dorsal surfaces.

It is really difficult to predict chances for recovery as the nature and extent of the disease varies greatly for each dog. In general, PCD cannot be cured but can be managed successfully.

There is nothing to worry about your pet’s PCD. It's an inherited anatomical aspect that may or may not heal eventually. The prognosis for PCD is guarded. A healthy routine and home care are the best defenses available.

Even if Ciliary dysfunction doesn’t get cured, most dogs adapt to the given health condition they are in.