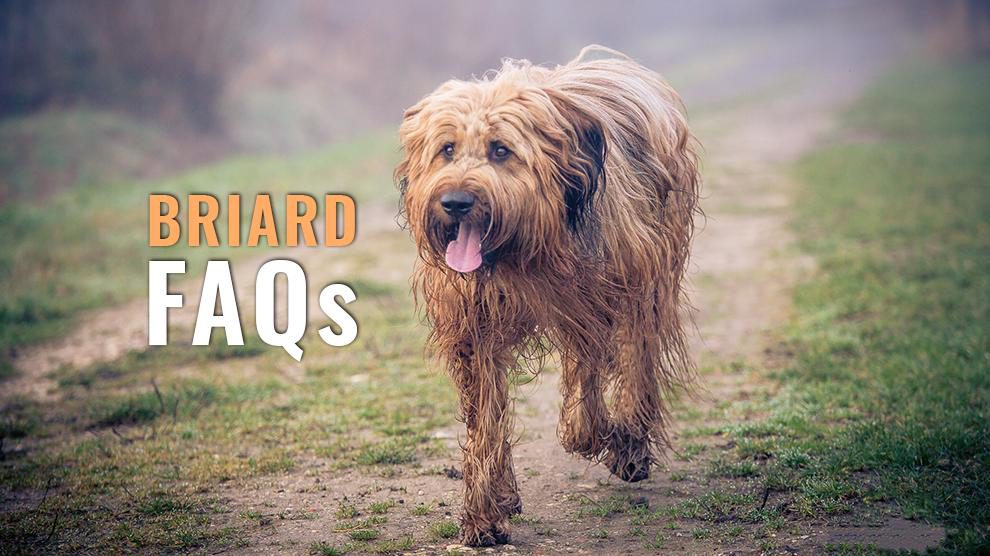 No. A dog that doesn’t cause allergic reactions….. this sounds too good to be true. And, it’s a kind of.

The wise thing to do is that you should always spend time with a dog breed before taking one into your home to see if you can handle it or you can consult a vet.

What Size Are Briard litters?

Litter sizes can vary, 17 puppies being the record. However, the average size of a litter is 6 puppies.

However, UK Kennel Club rules state that a dam can only produce 4 litters and she must be between a certain age to do so.

Like all other dog breeds, the Briards tend to shed once in a year and mostly during the spring and then again in the fall when more frequent brushing is needed to keep on top of things.

When grooming properly, they shed minimally. Most of the dead hair will be removed by the grooming.

Most Briards shed their soft puppy coat between 7 or 8 months to 12 or 18 months of age. That is their worst shed which may last for approximately one or two months.

Serious matting can result if the puppy is not groomed frequently, so it may be necessary to brush the puppy daily during that time.

What kind of dog is a Briard?

Briard is an all-rounder, with beauty and brains. They are clever and confident, tactful and trustworthy, loyal and loving but rather dominant, so early obedience training is essential.

Alert and agile, rest easy buddy, your Briard will watch your back – they make ideal watchdogs.

They are also great family pets and loyal companions who love to get involved in all aspects of family life.

They tend to play favorites and will favor one person in particular. So stay calm, if they follow the person who feeds them. No need to stress.

If you’ve got a house of little ones, your Briard is gentle and affectionate toward children. They tend to be suspicious and indifferent to strangers, but not that aggressive.

Most Briards are territorial with other animals but they will happily accept pets they grow up with. Anticipate this protective dog to alert you for anything odd. They have a moderate propensity to bark, so expect some conversations.

Is Briard a sheepdog?

Briards are one of the oldest French breeds and their history could well date back to the eighth century. They are used for guarding and herding livestock in France.

He was an “all rounder” farm dog that had multiple tasks to carry out.

Briards were used in all types of herding circumstances and helped ranchers move, manage and protect their flocks and cattle.

They were most regularly used as a farm dog in the more packed French farming valleys, where row crops were cultivated.

Sheep were allowed to graze the grass strips between crops and Briards acted as a living fence for keeping the sheep stick to these strips, so as to avoid the sheep from eating the valuable crops.

The Briard moved the herds daily from the farm to the grazing areas and back again in the evening.

If the herd is incohesive, briards will make it cohesive. But if it’s already cohesive, they will push the herd towards the target.

In the farm, the Briard was the herdsman’s associate, helping them with livestock chores. The Briard was also used to move large flocks of sheep in areas of rural France that had mountain pastures in summer and other wide grazing pastures.

Those flocks were moved to the grazing areas, much like large sheep ranchers do in Canada and the western United States.

The Briards were used alongside other briards or other breeds to keep the sheep from going off track and herd the sheep back to the farm.

And, that’s not all, they were the canine vigilante, protecting the shepherds and flock from wolves, thieves, and other predators during the night.