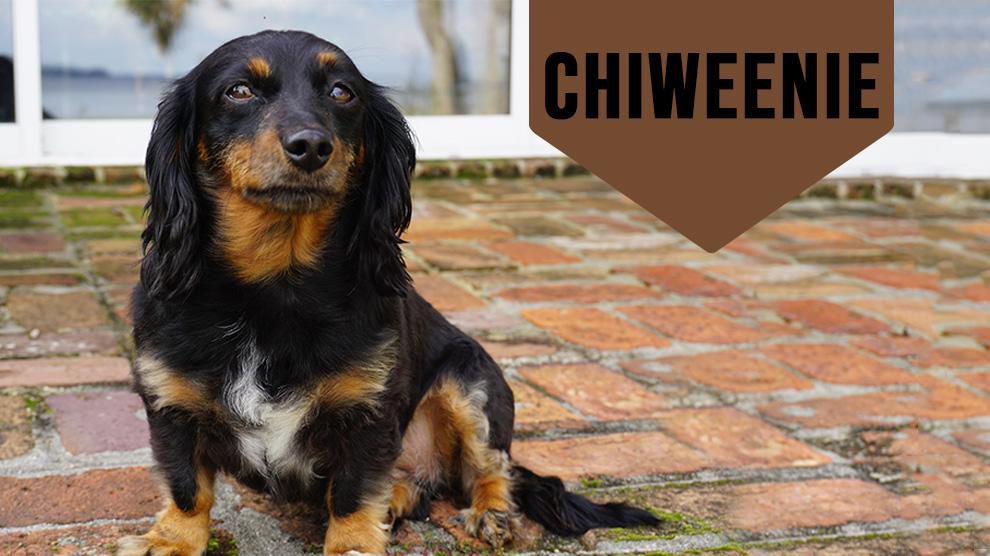 For such a diminutive dog, the Dachshund–Chihuahua cross breed sure has many names. Some of them are Chiweenie, Mexican Hotdog, Weiner dog, German Taco, Chawinnie, Doxiwawa.

Have you ever heard of the Mexican Hotdog or German Taco? No? Well, you are in for a treat buddy, trust me on that.  This itty bitty, adorable crossbreed is a mix between the cheeky Chihuahua and the debonair Dachshund.

This mixed breed has been around since the early ’90s, and right now, it is really getting popular. Feisty, friendly, and fiercely loyal, the Chiweenie is a little lap dog with a big heart and an even bigger personality. 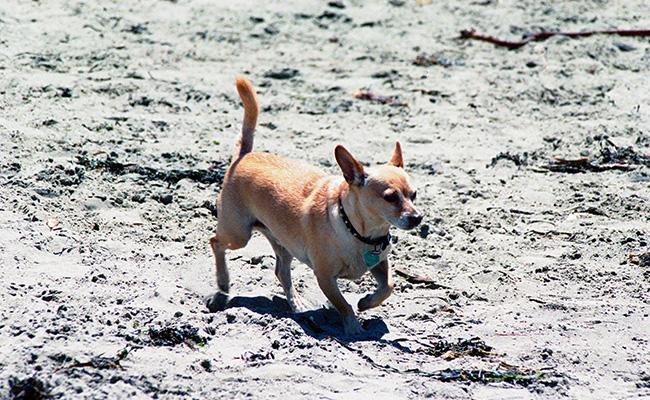 Originating in the early 1990s in North America, it is a fairly new breed which has grown immensely in popularity in the United States over the last decade. You may know that Tuna the Chiweenie on Instagram has a whopping 2 million followers.

The purebred parent dog breeds of Chiweenie have relatively different origins. The dashing Dachshund is of European descent, being from Germany while the cheeky Chihuahua is known to be of Mexican descent.

As with every designer breed, the intention of breeding Chiweenie was to selectively breed appearance and temperaments which would be desired for a specific group of individuals. 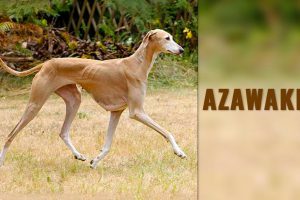 Azawakh Is A West African Dog Originated From Niger, Mali, And Burkina Faso. It Is Included In The Hound Dog Group Since January 2019. Check Out The Facts.
Read More
Back to Index

Is Chiweenie, The Right Dog For You?

A Chiweenie may be right for you.

A Chiweenie may not be right for you.

A healthy Chiweenie should expect to enjoy a life expectancy of between 12 – 16 years when properly cared for and fed a  to suit their ages. 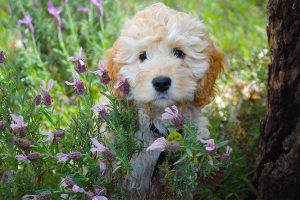 Considered As The Best-In-Show Dog, Poodle Is Crossbred With Various Dog Breeds. Know About The Various Poodle Mix Breeds Suitable For Your Family.
Read More
Back to Index 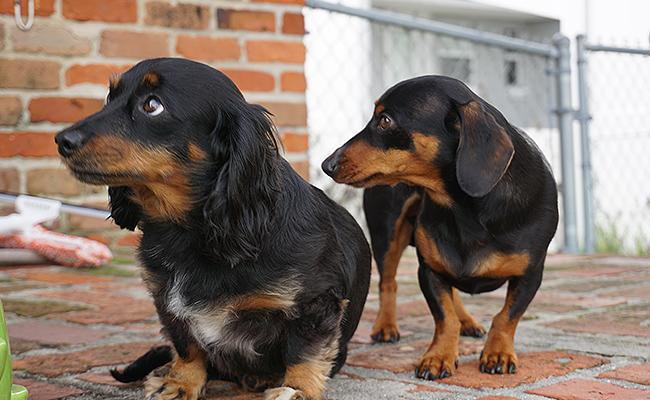 As with any hybrid dog, the Chiweenie appearance can vary quite a bit due to the different sizes and varieties of Chihuahuas and Dachshunds.

In general, the Chiweenie inherits the long, slim body and rectangular torso of the Dachshund (but the length of the body is a bit shorter thanks to the Chihuahua genes) with the wonderful cuteness of the Chihuahua.

Since the Chiweenie comes from a small parentage, it stands to reason that they themselves aren’t very big. Indeed, the tallest a Chiweenie can get is about a foot. Conversely, there is also a teacup variation of this hybrid that is even smaller.

Head is typically small depending on dominating genomes and the face may either have a short, more domed head like a Chihuahua or the long thin snout of a Dachshund.

The slightly arched skull should slope gradually without a stop into the finely-formed slightly-arched muzzle.  Their almond-shaped large eyes are set diagonally. Ears are floppy and set high near the top of the head with the animated carriage as well as the forward edge of their ears touching a dog’s cheeks.

Their necks are moderately long, clean-cut, tight and there are no folds or wrinkles or dewlap on the throat as well as slightly arched in the nape. They have muscular, prominent, deep chests.

They have slightly arched abdomens that permit sufficient clearance from the ground for dogs to move about freely. Dominant, well-muscled hindquarters with a broad, full rump and extended, strongly muscled croup that slopes rather towards their tail.

The short legs and small paws are sure to draw you into the league of Chiweenie fans. They have a long tail and are “wiggle butts” because when they wag their tails, their whole body wags.

Designer dogs very much more than their purebred parents in many different characteristics such as size, temperament, and coat. Even puppies from the same litter cannot be assured to look or act the same.

Check with your breeder about the differences between each Chiweenie generation, as the proportion of each parent breed modifies per generation.

F2 = offspring of two F1 Chiweenies bred together… and so on.

These dogs will also have many size variations. Dachshund comes in a miniature variety and Chihuahuas are also bred down to Miniature and Toy sizes.

While they are not as common, it is possible to find a breeder who offers Mini or Teacup Chiweenie dogs. Remember that every so often, dogs that have been bred smaller for size often experience health consequences that can be pricey for the owners.

Chiweenies are not the best choice for novice owners because they are little difficult to housebreak and are better matched to people who are aware of their parent breed as well as their specific needs which includes the health concerns the breed is known to suffer from.

If not handled and trained properly from the word go, these charming little personalities can become boisterous and wayward which makes it hard for owners.

However, in the right hands and with a little patience, it is possible to trounce their stubborn streak. Keep in mind that if a Chiweenie picks up a flicker of anything that’s more conspicuous, they are prone to blast-off after it.

This Mexican hot dog has inherent pint-sized mouths. If you pick a dry food for your pooch it’s essential to give her one that she can easily pick up and chew within her small mouth space.

Big or at times, even average size, kibble will also be tough for these petite pups to hold. However, many brands offer kibble customized for the small to medium sized dogs.

There are also several hydration-rich small breed formulas that will gastronomically go a long way toward satisfying your Chiweenie’s taste buds and give flavor to her mealtime experience.

As a rough guide, suggested daily amount: 1 to 1 1/2 cups of nutritious high-quality dry food a day. A puppy should be fed with wholesome meals which are evenly spread out throughout the day.  It’s best to feed 2 or 3 times a day

Remember, the feedings depend on puppy’s build. Once a puppy is 11 months old they can be fed adult dog food depending on their activity level and eating preferences

The Chiweenie is known to be a sharp, small dog, yet they are little hard to train thanks to the fact they are quite independent by nature and have a mind of their own which can be put down to the “doxie” in them.

When they are given the right amount of positive reinforcement training from puppyhood as well as with a lot of persistence and patience, doxies can be trained properly. you may also need professional help.

Stubborn, Subjective and very intelligent, Chiweenies are exactly like their big cousins the greyhound, will not comply with you if she sees monotonous or unexciting – mostly, if she is fixed on something, she thinks is much more interesting.

Keeping them in shape won’t take much of your time and energy, as they will often need a trip to the local dog park, a long game of fetch or a walk or jog around the neighborhood to feel satisfied.

Make sure to consider the length of their legs when you are planning your dog’s training or exercise regimen! The Chiweenies are ideal for people having a relaxed lifestyle and the ones who lack a great deal of time to carry out their pooch exercise sessions.

Inconsiderate training methods do not work, as this is a sensitive and stubborn hybrid, so the best way is to keep training sessions short and interesting. Playtime is an excellent way for some basic training sessions, socialization and for owners to bond with their dogs. 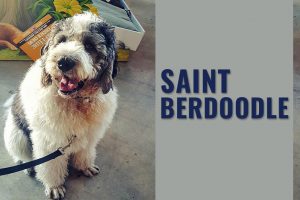 Adorably Looking Saint Berdoodle Is A Cross Between Saint Bernard And Poodle. Find Out The Size, Lifespan, Temperament, Price And Facts About St Berdoodle.
Read More
Back to Index

The Dachshunds come in 3 coat types: short, long, and wire-haired. There is also both long and short haired Chihuahua so there are plenty of coat possibilities for Chiweenie depending upon what type of coat the parents had.

However, the Chiweenie requires very little grooming as compared to their parents and other breeds. They are fairly easy to groom, as they are low-maintenance dogs.

They are low shedders( but they are not hypoallergenic), so brushing their coat once or twice a week (a couple more times if it is a long-haired Chiweenie) will meet your requirements.

When the fibrocartilaginous cushions between the vertebrae (except the first two cervical vertebrae) in a dog’s spine degenerate or ruptures or herniates into the spinal canal, resulting in severe inflammation and pain, partial loss of limb function and even paralysis.

Commonly called as a trick knee, this inherited disorder is characterized by ectopic development of the distal femoral patellar surface or lateral to the trochlear groove of the femur.

The ensuing abnormal tracking or dislocation of the patella causes it to slip out of the groove and eventually rupture their cranial cruciate ligament. These dogs often have either a knock-kneed or bow-legged appearance with varying degrees of lameness

Gastric Dilatation -Volvulus, or more generally referred to as gastric torsion or Bloat happens inadvertently, in which the stomach becomes overextended and swiveled by excessive gas, fluid, froth or all of these.

This is a grave condition and if the dog is not brought for veterinary care immediately, the dog will not survive.

(AKA hypercortisolism, hyperadrenocorticism) this is an endocrine disorder that’s typically found in older Chiweenies.

The most common cause of Cushing’s disease (85% of all cases in dogs) is a tumor (may be either benign or malignant) of the pituitary gland or a tumor on their adrenal gland.

This is an inherited neurodegenerative disorder characterized by severe axonal swelling (spheroids) all over the nervous system. This typically affects the dogs between 1-4 months of age.

The price of Chiweenie puppies will cost you anywhere from $200 – $600 from a reputable breeder. Then there are licenses, vaccines, preventative medicine, heartworm testing and – of course – spaying or neutering. You’ve added an extra $400 to the actual price.

Alternatively, you can adopt at dog rescue centers and animal shelters for around $200. They exist in all the countries and will also have grown-up dogs to re-home.